I’ve been busy RL with things; one of them is making my son Vincent a Minecraft themed cake. It’s not Pinterest worthy; but eh, he was happy with it and considering that I’ve never worked with fondant before, or done anything with fondant other than eat it, I’m okay with the way it turned out. The cake itself was yummy and fluffy and the children were greatly entertained by the fact that the sparklers were set into the TNT block’s ‘fuses’.

The other thing I did was to rearrange my workspace again. I’m rather pleased with how it looks so I took pictures.

Those sparklers were hard to light! Housemate ended up with rather lousy matches – five of them broke while he was attempting to light them. 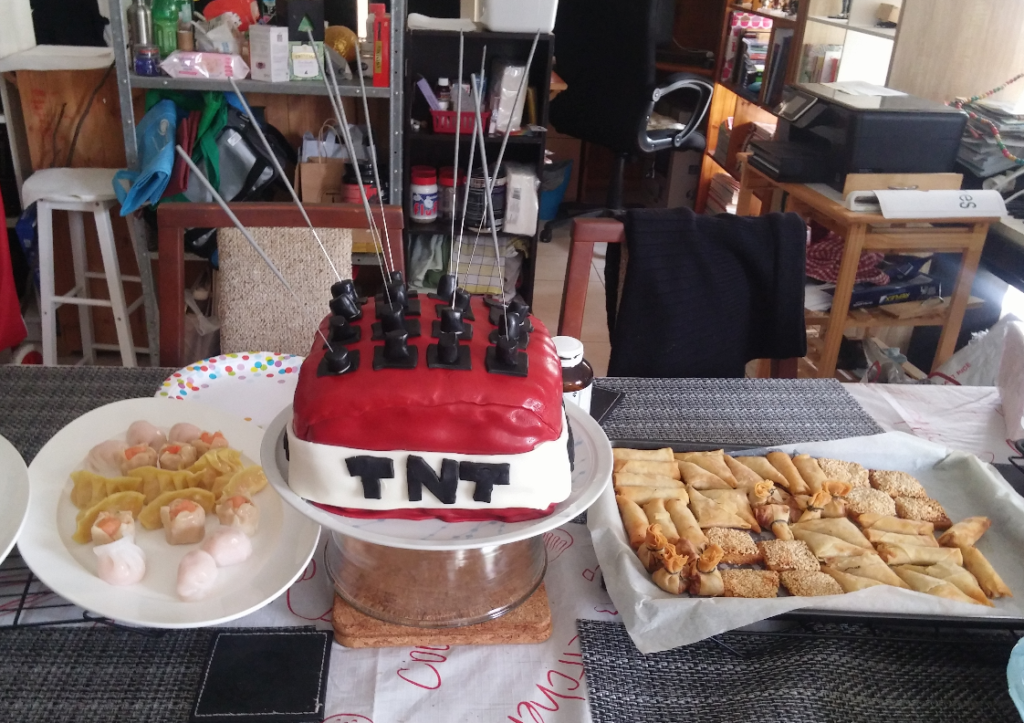 The dim sums were a good choice, since they’re easy to sneak in between the cake bites.

The kids had fun at the party; we just let them play on our Minecraft server and build stuff.

The next bunch of pics are of my work space.

Here’s Riley, in his play-perch area, which sits on top of the long shelf that holds my artbooks and art references. I’m going to need another bookshelf soon, but I don’t have somewhere to put one. Well. Maybe a small one.

This is what the whole of my workspace looks like. The white keyboard is only there temporarily;  though I have to admit it is a dream to write with. I’m borrowing it only because my old one got broken. I’ll have to find a replacement for my keyboard, because I can’t keep that white one. It’s an ASUS, and I love how the ASUS keyboards feel on my fingers. That particular one is really nice – easy on my fingers, comfortable to write with and it’s not noisy! But it’s a bit wasted on me since that’s a gaming keyboard and I don’t really game on that PC. Not unless you count Minecraft.

We had a bad power surge and I couldn’t use my computers for some months to keep them safe. Now that it’s hot, that air conditioner up there is often turned on. It’s really cold, out of necessity, so I’m often bundled up in either a cardigan or a sweater, especially in summer! 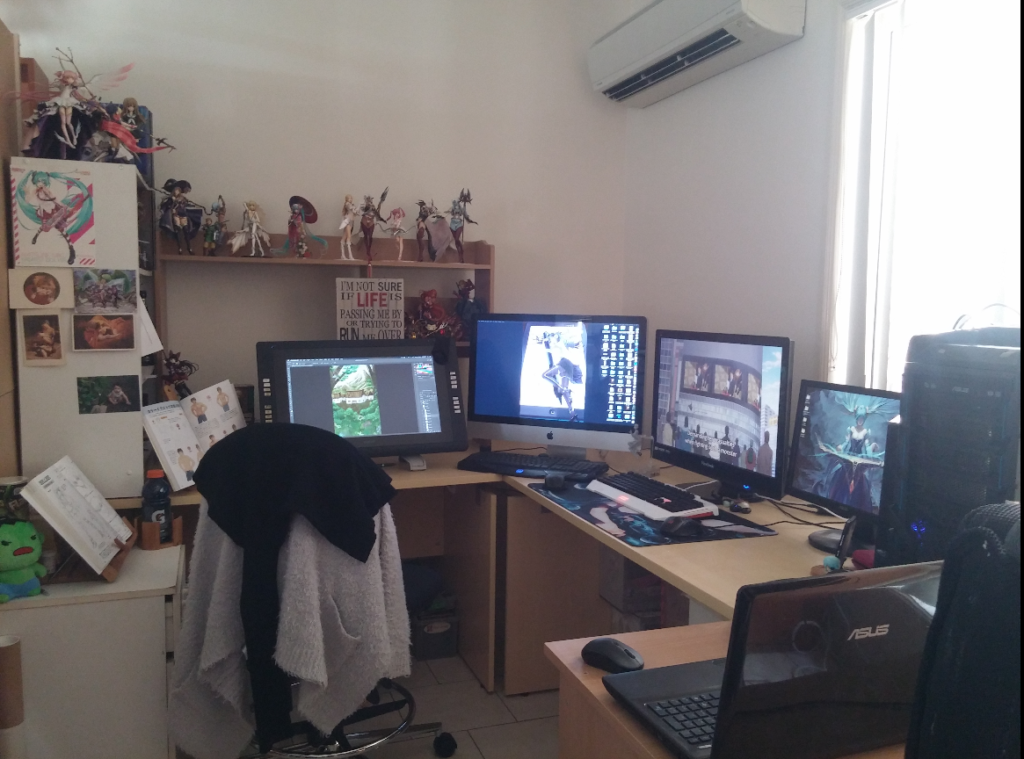 The little laptop lets me keep an eye on my toon while she fishes in Lineage II, so I can click on the quest every now and again. The smaller screens are for music, communications and videos while I work.

The little thing with the baby photo of Brandon is my cellphone. I think some people will cotton on to the notion that I’m…rather fond of ASUS products. ^,^;

The big screen is normally where I’d be writing on; but I’ll watch anime or tutorials on it if I am doing artwork. The Mac is the art PC, to which the Cintiq is connected.

I’m really glad that I can start getting back to work, as I’m very much behind on a lot of projects. 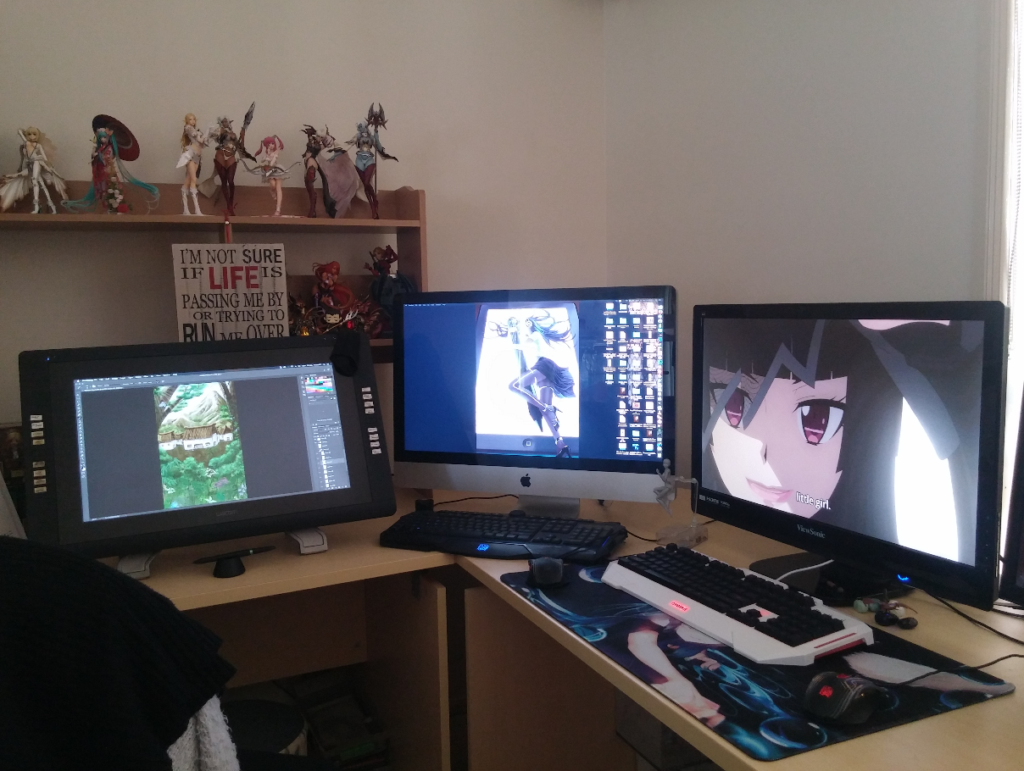 That’s only part of my figure collection. I put Link there to be the token guy character (well, besides Neko-Loki, who is flanked by two chibi dragons.) I didn’t want to separate the cast of male characters from the Tales of Series shelf, which is behind me when I work. I might move Mikazuki Munechika to stand next to Miku there though; he looks like he’d suit being next to her.

The shelf at the side contains writing references – things like name books, a thesaurus, and some other such things. The bottle of ginger ale is empty, and I’ve been keeping it there as an inspiration for a project that I’ve not been able to get started on, to my vast dismay.

I’m glad I was able to fit those two book holders. The books there were placed for the photo; and are not related to any current projects. The current project I have is a book cover that has been plagued by technical difficulties and RL difficulties further delayed the finish of it. 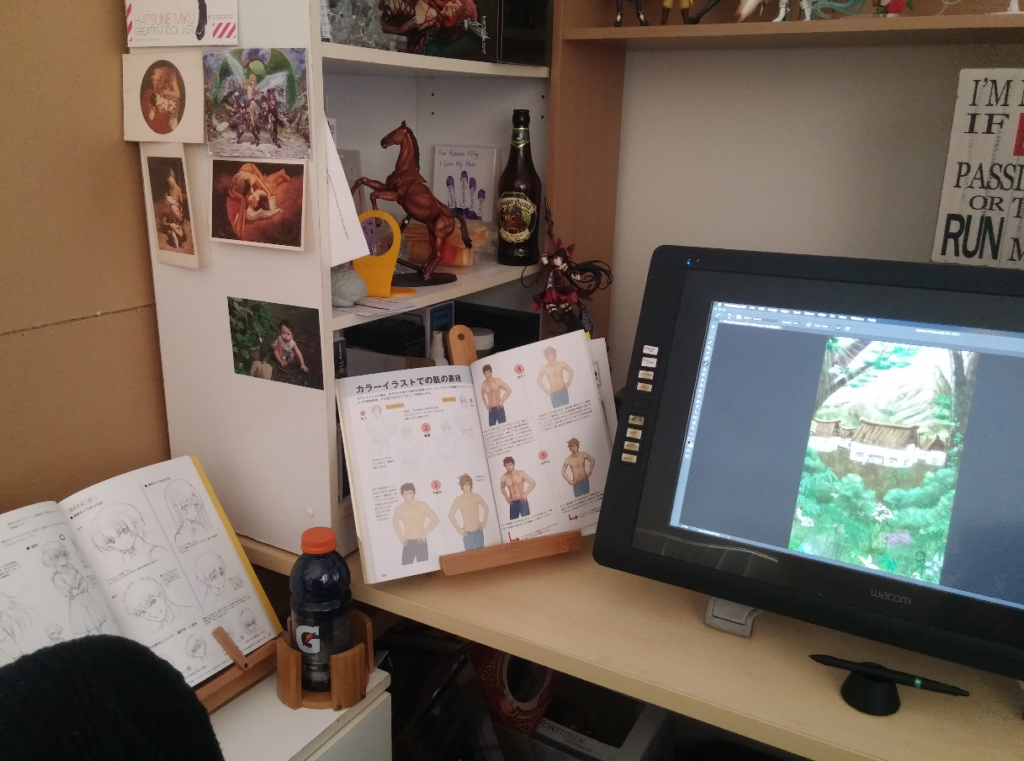 That photo is of Vincent, when he was less than a year old. I can’t believe it’s been ten years!

Tomorrow is his brother Brandon’s birthday, and with all the things that’s been going on, it’s kind of snuck up on me. I haven’t quite got something planned yet, like cake, but fortunately I have a little present for his birthday memorial celebration. Perhaps I’ll make some thing other than cake though, since we have plenty left! We’ll see.