SO HARD TO CHOOSE BETWEEN MOVIES. 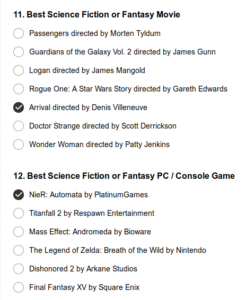 That was honestly my hardest choice on the ballot. Arrival or Doctor Strange? I eventually went with Arrival because it was more intriguing for me. (Sorry, Benedict. I love Dr. Strange, but… TToTT )

Authors Larry Correia and Benjamin Cheah have posts talking about it. ANYONE CAN VOTE.

I’m not sure why this one’s been sticking in my head today, but it has. Perhaps it’s the wind, howling outside with the sun shining down through an unrelenting blue sky, that’s jogging my memory…

Some years ago, Rhys and I faced a dilemma – how to get his job to recognise that he had a family, and was supporting one, as opposed to being a single man with no financial responsibilities. After much research, Rhys found the answer: to be recognised as a de-facto relationship, a legal definition in Australia which is similar to ‘common-law spouse’, I guess. For this to happen, we had to live together, as a household, with shared finances and living arrangements, for more than six months. It just so happened that at the time, Rhys had been assigned a three-bedroom residence in Sydney. It took some time to decide on logistics, but the time period we finally worked out was bad for our eldest to come and stay with us as she was attending school (and she wouldn’t be able to attend school in Australia for that period of time.) So for a short while, I lived in Sydney with Rhys, and our then youngest, Vincent, who was three years old at the time.

END_OF_DOCUMENT_TOKEN_TO_BE_REPLACED

I made my jump from MS Word to LibreOffice the same time I made a pretty huge jump from Windows to Linux (Mint, Debian edition) for security reasons. That was back in 2009, and while I’ve moved into ‘what works best’ mindset, I have to say I’m very happy about having moved to LibreOffice and away from Word.

LibreOffice can be used across most platforms and OS-es; I use a Mac, a Linux Debian box and a Windows box (the latter usually for gaming and entertainment) and they work, from my own personal usage, with no discernible differences for a simple end user like myself. So you do not have to move to a Linux OS just to use LibreOffice.

In fact, I have not used all of LibreOffice – the two which I use the most are LibreOffice Write and Calc, the latter being a spreadsheet program which I keep track of grocery shopping and house budget with.

I’m not here to convince people to make massive jumps away from unfamiliar OS but simply to illustrate that if you do decide to switch from MS Office to LibreOffice, you’ll find that there is very little to worry about in terms of learning curve – especially if you use it primarily for documents and writing – in which case, it’ll be LibreOffice Write you’ll care about the most.

I also use LibreOffice Write for the majority of formatting for both ebook and print books – that is, the formatting of inner book content. As I’ve thus far only made books with only text, as of this post I can probably comment only on that. But for now, this post is concerned with how LibreOffice Write looks and on the very basic, works.

This is a post done mostly in response to some comments in Mad Genius Club’s post  “Formatting for Print – Revisited.” I just found it easier to quickly snap off some screenshots and make this post.

Click on the image to see a bigger version. That said, the rest of this post will be behind a jump.