So, my son literally (hahahahaha see what I did there?) devoured every single Matthew Reilly book I have, except for The Tournament. He barely had put down The Four Legendary Kingdoms and was already looking for more. (He was VERY upset with what happened in Scarecrow.)

So I gave him what I had of Diane Duane’s Young Wizards series, scraped together the money for  Games Wizards Play and it arrived just as he got through The Wizard’s Dilemma. I read GWP first of course, but hesitated on giving it to my son initially because of the sexuality/relationships subthemes. Son has a puppy-love girlfriend, but he isn’t mature enough yet for the more complicated hormones-sexuality-etc soup; and since I’d told him to come to me and ask if he had any questions, the introduction of a couple of young openly gay characters wasn’t something I was sure I’d explain just yet. So I went to have a chat with my son about the book.

Turns out though, he already knew that ‘gay’ = people who date/fall in love with the same sex, so while he doesn’t know/care about the nuts and bolts of it, he knows about that. (How, he’s not really sure. Kids pick up stuff.) Since Games never goes into more detail than ‘he’s/I’m gay/have a boyfriend’, I changed my mind on that score. Since we were talking about it already, I explained, very simply, what asexuality was, since that crops up too. (Son knows basic biological scientific sex; e.g. what makes a baby.)

I know there are some folks out there who will scream ‘censorship’ but, quite honestly, sod off. My son might be more emotionally mature than most kids his age (the death of two siblings will do that to a child who’s old enough), or perhaps a bit smarter (reading will do that) but I am pacing what he reads based on what I observe he’s ready to handle, or understand properly, or understands so he can properly enjoy or react to the work.This is a kid whose level of relationship is that ‘you’re boyfriend and girlfriend if you like each other and kiss and hold hands.’

In much the same way I wouldn’t hand him any of Anne Bishop’s books, and I love her writing, and am waiting until he’s a bit more mature before I give him any of Larry Correia’s Monster Hunter series, and going by current development, the boyo might not read the Monster Hunter Memoirs books until he’s 14 or 15.

Toward that end I’m trying to get my hands on hardcover David Eddings books; and trying to find the first trilogy of Dragonlance.

It’s rather interesting that most of my book purchases of late haven’t been new release books, but trying to hunt down older ones. I prefer hardcovers now because they’re more durable and stand up to re-re-re-re-reading. I got lucky and found a Domes of Fire volume that has Larry Elmore’s art on it.

This is the reason why ultimately, my Dragon Awards nominations are rather sparse.

Best YA novel: Would have voted for: Games Wizards Play – Diane Duane (released too early to qualify; first half of 2016)

Best video game: Would have voted for: Nier: Automata (released too early to qualify; first half of 2016)

END_OF_DOCUMENT_TOKEN_TO_BE_REPLACED

Earlier this week I noticed that my eldest son was almost done reading Matthew Reilly’s The Six Sacred Stones, mostly because he was asking if there were any more books in the series. I proceeded to dig out my hardcovers of the next two volumes, The Five Greatest Warriors and The Four Legendary Kingdoms, and handed them to him. He happily puts them in his room, and I figure he’ll be entertained by that for a while.

Two days later, the boyo suddenly starts talking about something that happened in The Four Legendary Kingdoms over dinner, and I interrupt, saying, “Hang on, didn’t I just give you those books practically yesterday?” END_OF_DOCUMENT_TOKEN_TO_BE_REPLACED

My son is reading, because of dragons.

I’m very happy that my eldest son is into reading fiction now. It was very difficult to get him to get away from computer and TV screens. I’ll admit that getting him to read segued from the kiddlywinks watching a movie then finding out that the movies were books first.

That, and the long periods of time when they couldn’t play video games because we couldn’t afford to fix computers/replace expensive parts. For years we didn’t have TV (it wasn’t plugged into the antenna) and they’d run out of DVDs to watch. “I’m bored,” holds no water when the parental response in the household is to brush a finger down the spines of several books, select one and hand it to the kidlet, “you can’t be bored, you haven’t read all the books in the house yet!”

So the trick to get him to read was to give him books that he liked. In this case he was very much into dragons, so I got him dragon-centric fantasy books and fantasy adventure books that I felt were straightforward engrossing stories that any of the children could read. Wings of Fire was obtained, along with some volumes of Brotherband (we’ll really have to try get him a boxed set at some point, because we fell behind, in favor of Wings) and then for his combined Christmas and birthday money, we went digging through Book Depository for books he wanted.

To my delight there’d be times where he would opt to read instead of watching TV or playing video games. In the morning after breakfast and before going to school he’d be curled up on the couch, reading. At first he rehashed all the ones he’d already read, and then I pointed out that he had unread books on his shelves waiting from his last book buy binge. It took some doing, but we got him Dave Freer’s Dragon’s Ring and Dog and Dragon, which he enjoyed.

Recently, I handed him Matthew Reilly’s Troll Mountain. He liked it a lot as he finished it the same day, and remarked about how the cure for the disease turned out to be such a simple thing. I told him that the disease in the book was actually a disease that exists in the real world and it used to kill people very regularly. Right now, he’s working on The Great Zoo of China. He got through the first three chapters bam like that. END_OF_DOCUMENT_TOKEN_TO_BE_REPLACED

A few weeks ago, on a whim, I looked up Luis Royo on Book Depository again, and discovered not just that the site had restocked several of the artbooks, but also listed The Ice Dragon, written by George RR Martin… and illustrated by Luis Royo. Billed as a children’s book, both Rhys and I were quite intrigued by the idea of Royo-sensei doing art for a children’s book – we’re more familiar with Royo’s sensual, beautiful art as applied to fantasy, sci-fi and erotic works. Nevertheless, as we are both fans of Royo’s work and Martin is a good writer, we ordered the book.

Even better, when I looked inside, it was quite clear that 1) this IS a children’s book, but as it was written back in the 1980s, it does not give the feel of talking down to the reader the way I sometimes feel these days reading some of the books assigned to my son’s reading in school. and 2) most of the book is graced by beautiful illustrations by Luis Royo.

A quick skim of the book tells me that, provided your children are the old-fashioned sort, this is a book that you and your children will enjoy, especially if it is read out loud – but I’ll leave that up to the parents’ judgement. Martin weaves a beautiful, but bittersweet tale. 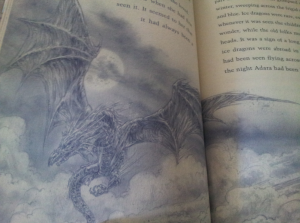 I’ve found out since this is actually a new edition and the older version had a different illustrator. I’m very surprised at how well the artwork fits the story. The print version (I can’t speak for the Kindle version, I’m afraid since I don’t have that) has both text and illustrations tinted blue, with illustrations on the inside of the cover and the back, at the end of the book in yellow tints.

A surprise awaits with this edition of the hardcover, as the dust jacket hides a larger, extended version of the cover.

All in all I’d consider this a fantastic buy, both for the appreciation of the wordsmith’s craft, as well as the artist’s. It is, in my opinion, a perfect meeting of the skills of two masters in their art.