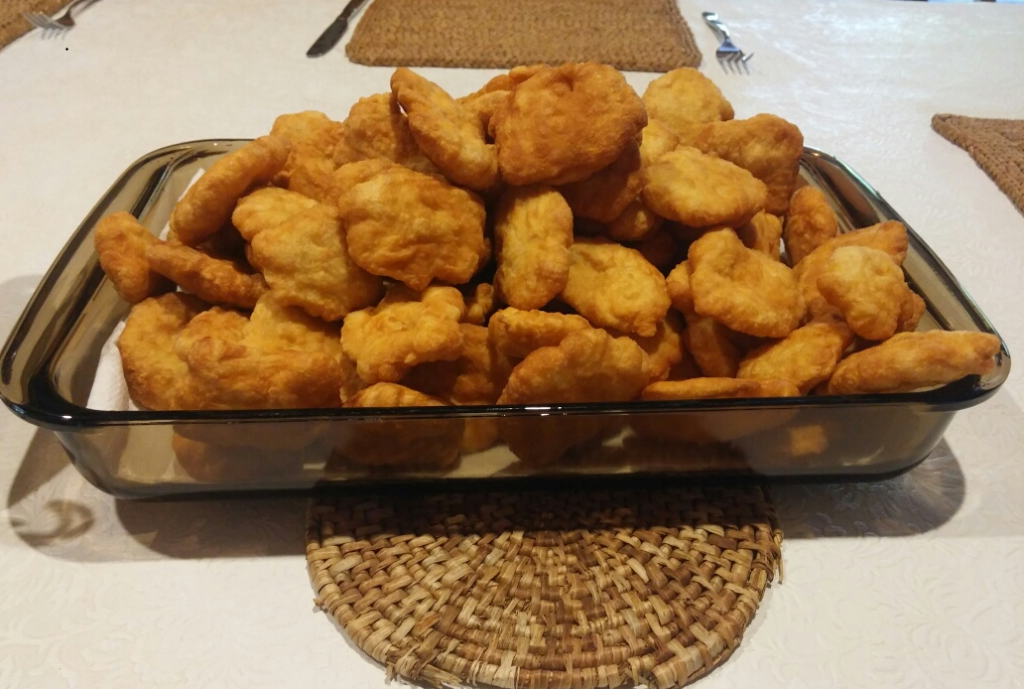 I’d originally intended it to be a snack, and it ended up becoming part of dinner the next night.

December in Australia being what it is, it was very hot, and by the end of the day – with temperatures hitting the high 30-degree centigrade mark – having cold meals were becoming appealing. Having the freshly fried, salty bread nuggets was a great addition to the cold cuts, cheese and salad. The dish I used was a dessert plate, and I was VERY full.

The bread was a big hit; being unusual yet moreish and easy to eat. There were leftovers as I’d “made enough to feed an army,” and I had some the next day with maple syrup. If you are fond of salt-sweet contrasts (like sea salt caramel candy, or bacon dipped in dark chocolate) that is a combination I highly recommend! I immediately regretted that I didn’t have some bread with maple syrup while it was still hot.

This version differs because instead of four cups of flour, I went ahead and used a whole kilo.

Also, the oil’s temperature was measured (brother-in-law used a digital instant read thermometer) and measured it at 180 degrees centigrade before we started frying. While we cooked, the temperature didn’t drop, and I think at the highest it was at 220 degrees centigrade. As a result, the bread was crispy and warm, but not at the least bit greasy or fatty!

The result is not too unlike a salty doughnut nugget, and does not have a hollow bubble in the middle the way the wet dough version has, thus more suitable for a meal. I can easily imagine it being fried up to go with jerky and foraged food, and roasted rabbit or wildfowl. On second thought, it would probably be ‘baked’ up in a skillet, over the fire’s coals…

This version is a bit more chewy and crispy than the other one, but does not make a hollow puff in the middle the way the more watery dough does. As such, it is less of a snack and more part of a meal, resembling a proper bread that’s a bit denser than a doughnut and yet not as dense as a bagel. Best eaten with cold cuts and cheese, or with maple syrup or honey to dip the bread in.

Mix the yeast with the sugar water and allow to proof.
Mix the salt water and the yeast water with the flour in a big glass bowl, until you have a rough dough. Add water and oil if needed, to make a nice, kneadable dough, and there is no more dry bits. Coat the top of the dough with some oil.
Cover with a damp cloth or plastic wrap and leave to rise at least four hours, or overnight.
At least thirty minutes before cooking, start pulling out chunks of dough about two fingerwidths wide. Knead and flatten, with oiled hands, and set aside on a plate. Make a plateful, as this gives you a head start for frying.
Heat enough oil to deep fry, at 180 degrees centigrade. When it is hot enough start frying pieces of dough in small batches (8 pieces max). Allow to fry until both sides are golden brown. While frying, knead out more dough. (If necessary, enlist help!)
Scoop out the dough with a sieve when the bread is a crispy golden brown and continue deep frying until you have no more dough left.
Serve warm, as a side to a cold-cuts meal, or with maple syrup or honey. Can also be eaten cold.