(above image is a screenshot from Danbooru by Sima Naoteng note: url is safe for work; though most of Danbooru is not.)

So I discovered a bunch of absolutely hilarious fan-art depicting the 2016 US elections. I’m probably very late to the whole thing, but now I know why there’s a running meme-joke of Trump being the God-Emperor. (Or, at least if this art circle didn’t start it, they ran with it and made it awesome and freaking adorable.) 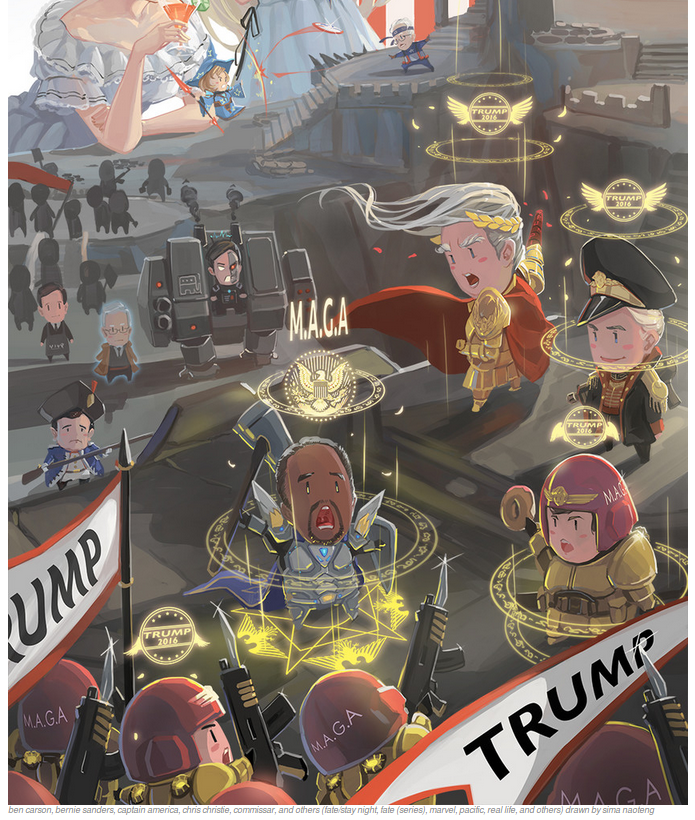 Notable to me is the depiction of Hilary and Bernie doing a lot of fighting in the background in a number of these, practically ignoring their actual opponents – a rather apt depiction of how it looked to me for a chunk of the elections. Yes, that’s Milo Yiannopolous  dressed as a commissar; though he’s not tagged as such in a number of the other pictures where he shows up. I’m not sure why Rubio is depicted as a cross between the Terminator and Darth Vader though. Jeb Bush is the ghostly figure in the background.

That is seriously the most adorable fanart of Ben Carson I’ve ever seen.

I’ll cheerfully admit I don’t know most of the memes – like the water bottle, or the shiny pants. I sort of understand some of the ones portrayed (like how Hillary, more or less backed by Obama, overshadowed Sanders. I kind of gather in later potrayals Carson’s supposed to be a Paladin from Warhammer 40k. Notably, the depiction of a number of the GOP standing in the way, but not really …effectively doing anything. I don’t get the depictions of Bernie as a druid at all, but apparently there’s a lot more discussion about the artworks on the doujin circle’s blog that I really should look at. Heck, I agree with this post. It somewhat helps that they have a character list – and I agree with the writer, I value freedom of speech, not freedom from speech. It was rather obvious that even though the writer was solidly on the Trump side, the writer and artist were careful to take care with the fairy personifications of the people here. They aimed to portray US politics in a lighthearted way, and I think they succeeded beyond their wildest dreams.

On a different note, I really, really like this. Clearly, I’m not the only one. Mattis FOR THE WIN. Appeasement doesn’t work. 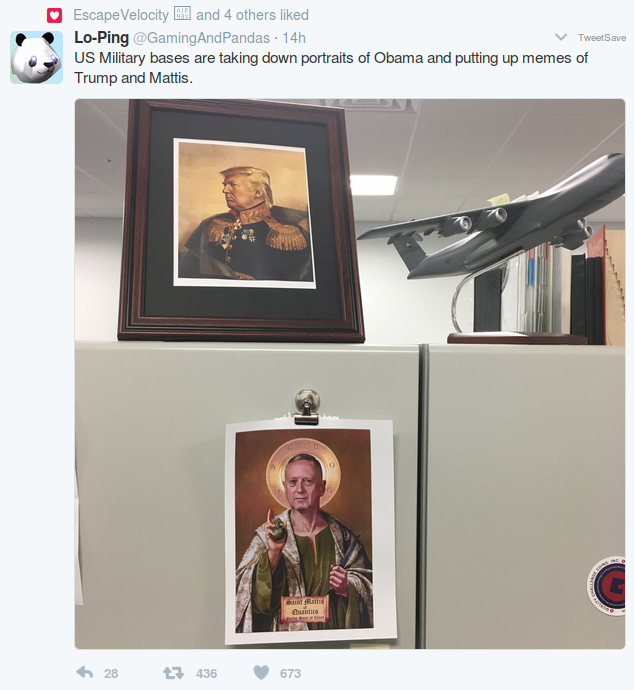 Veering off to news discussion now though, I really like how the earlier artist depicted Big Media. Having read bits of news here and there, it’s rather stark to me that neither Big Media, nor the screeching socjus wankers have really gotten a clue and plunged straight off into the deep end (conveniently forgetting what their preferred candidate’s husband and party was okay with, really revealing their double standards.) Pulling more of the political correctness bullshit and trying to shame people into pretzel-bendover accommodation of the feelings of a few, an entirely useless and pointless ‘women’s march’ with a main organiser that supports Sharia law and then telling pro-life people that they hope those pro-life women get raped? By reinforcing and proving true every single negative stereotype about women that exists, you’ve only become the laughingstock of the rest of the world. Guzzle a cuppa of ready-mix and harden the fuck up! and actually do something that isn’t screaming and throwing tantrums and tampons – but that would take more effort and thought and doesn’t directly benefit you. 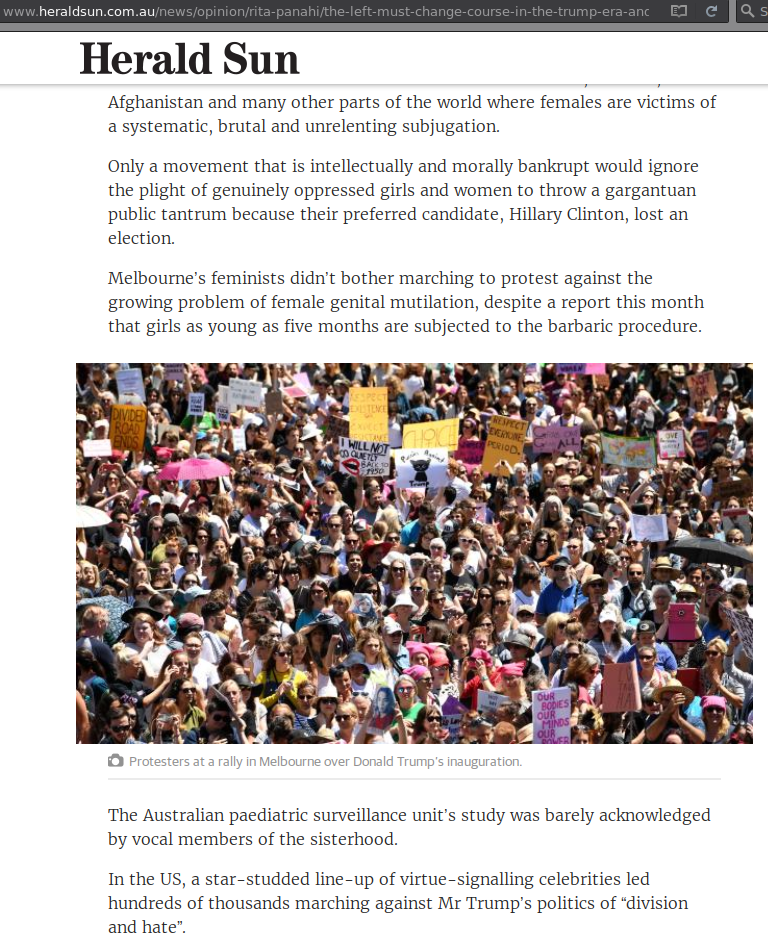 Also, really, all the rest of you doing protests that Trump isn’t your president and whinge about getting abortion taken away somehow by his being in the White House – I don’t see why America has to pay for your abortions and contraception; and last I checked, America wasn’t the entirety of the whole world. Australia is not the 51st state of the United States of America, and is still part of the Commonwealth… and Brits, the US hasn’t been part of the Commonwealth for the last few hundred years. Philippines, the US hasn’t been the colonial master since… World War II ended at least. If y’all want to behave as if we ARE part of the US of A, then move there (though if they tried I can almost imagine that there would be a number of private citizens buying their own bricks to donate to a wall to keep these idiots out!)

There’s a time and place for voicing your opinions. A library isn’t it, scaring your children isn’t it, nor is harassing someone you happen to sit next to on a plane (the cheering made me happy, as well as the response by the staff) and a whole massive list of stupid actions since he won – not one of those are it. Harassing someone you assumed would give you the soundbite you wanted? NOT IT. Also, win answer, dude. Refusing to do your job because politics/religion/opinion? I thought that was verboten, leftists! Or only for your side?

And WAY TO GO TRUMP! Being more pro-woman than any one of those Women’s Marchers ever are, with just ONE SINGLE ACTION. Thank you for speaking on behalf of not just unborn boys, but also unborn girls.