We got in touch with the chappie, who I think had just come back from out field, and he said that if I wished, then he would perform the funeral rites for Brandon. Rhys has actually met the man before, and told me a bit about the fellow. He migrated from Eastern Europe and used to be part of the Special Forces equivalent of his nation of origin’s military. I hadn’t known that and somehow, it gives me a measure of comfort that he’s the one we got in touch with.

I’ve been spending the time since preparing for Brandon’s final journey, and comforting the children. It’s finally sinking in.

I know that for a person looking in from the outside, what I do is probably more of a symbolic comfort for myself, but when we lost Damien to stillbirth I couldn’t stand the thought of sending him on his final journey without some of the things we would have loved to have him enjoy. So we got him some toys, clothes, blankets, and books that my father could ‘read’ to him; things that he’d ‘have’ in the afterlife. And as I do with all my kids, I sewed him a little pillow, like the one I have.

Rhys dressed him. I had this overwhelming, irrational fear that if I tried to pick Damien up, he’d fall apart in my hands. We kept a lock of his baby hair, and tucked him in his little white and silver casket. Rhys referred to it as Damien’s race car, ‘to zoom him up to heaven.’ My mother had sent a wood-bead rosary, blessed, to put with him, but we couldn’t find it so I put one of the olive wood rosaries my father had given me during a visit back from Israel in with him. (We later found the rosary, under the bed even though we’d checked there. I keep it with me now.)

It hurt the last time, and we still bleed from that loss.

We had to do it all over again, and will have to do it still. Rhys is busy clearing his work schedule so that after the funeral, he can take some time off to mourn, so this past week has been us scrambling to find things before the shops close here, and they close at 5 – 5:30 pm.

Some to send with, some to keep for memories…

Brandon got nicknamed ‘Little Dinosaur’ by Rhys because the sounds our baby made reminded him of the baby dinosaur hatching in Jurassic Park. Unfortunately we couldn’t find a fitting stuffed toy or plush T-rex so we went with the stegosaurus because of Bran’s ‘prickly’ nature. I got one each for myself and the kids as well, to hug when we miss him. We did find him a wooden t-rex puzzle and a wooden toy car.

It’s sad when you have to think about things like ‘can it be cremated with him?” and take things such as that into account.

I had been looking at the Monster Hunter ‘tactical bodysuits’ while I was pregnant and was just waiting for Brandon to grow enough so that I could buy one for him to wear. The night after he died, I ordered two, because Rhys said that he should wear one as his ‘travelling clothes.’ I reckon it fits anyway, because where our boy’s going, there’ll be no monsters under his bed, unless my father decides to play pranks on the boyos. We’ll keep the other, and put it in his memory box.

We got some clothes; a new swaddle wrap and fluffy blanket, and a new fluffy crawler; he loved those things so we will put those in with him. I made him a new pillow, because I haven’t gotten the one he was using back from the coroner. I hope they haven’t disposed of it.

My youngest brother took time off work and he and my mother went to find me a wooden rosary again. They found one. They also found cute clothes sets, and a baby-sized barong tagalog for Brandon. Tony2 insisted on buying it. They also bought a stuffed toy Oscar the Grouch, because well, most of the pictures they saw of him had, per Rhys’ description, ‘judgemental, disapproving expressions.’ 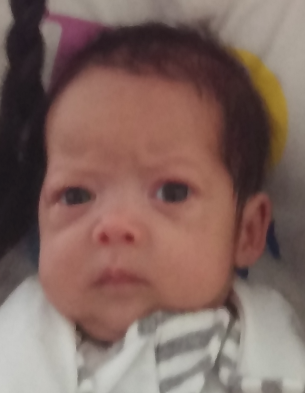 I didn’t do Star Trek ToS binging while I was pregnant so I have no idea where he got that from.

I gave birth to a Vulcan. 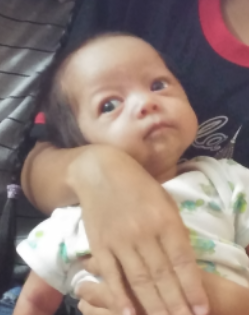 The expressions he wore! Brandon enduring a photo session with the older siblings.

Or at the very least, someone who potentially could have rivalled Dr. House for snark. Raising him would have been fun.

We’ll keep the Oscar and the barong in the memory box, along with the ‘tiny baby’ outfit and a couple of the shirts my mom sent, as well as some of the things none of us could bear to part with, like the muslin wrap that still smelled of him; like warm, sweet milk.

Speaking of the memory box, we bought a wooden chest. Damien and Brandon will share ‘the bunk bed’. We’re planning to repaint the thing though, and discussing how it should be decorated. Dragons and Dinosaurs, perhaps.

One of the other things I’ve been doing is looking for fitting music to play at the funeral.

I’m not sure what to think of that really. On one hand, I know that it’s supposed to be comforting; on the other, I end up crying. (So if you see me making ‘happy’ sounding comments, that’s because I am trying to distract myself from being too depressed. Being too depressed and sunk in grief means I get sleepy, and I get nothing done that way.)

On Monday or Tuesday we’ll probably go to the funeral parlor and choose the urn and the ‘race car.’

Brandon’s funeral will be held at the Woongarra Crematorium on April 30, 3:30 pm AEST.

The funeral parlour will let us know when his ashes will be ready for us to take home. As we are a military family having a grave is not a practical option. As parents the thought of leaving our sons behind was more than we could bear. They’re still our boys and always will be.

For now, today is ANZAC Day. 100 years since Gallipoli.

And it’s exactly 3 years since the children and I migrated here to Australia. Despite the heartrending loss, I love it here.

I miss my boys so much.