Suffering from insomnia. It’s past two am. I hurt all over, because there should be a peacefully snoozing baby near me and every cell of my being is refusing to let me rest because of how wrong this lack of Brandon is. I have this driving need to find and retrieve my son, and there is this Brandon-shaped hole in our lives that tells us he is gone, we won’t see his bright, piercing gray-eyed gaze or hear his voice as he cries or coos, or cuddle his small body against ours or feel his tiny, chubby arms trying to hug us back.

The last few days have been frantic with the last preparations for this painful day. Photos printed to go with him, last checks of what he’ll have. Unclogging my Dad’s Waterman fountain pen so I can write the letter that’s a good-bye and of my love for the rest of my life.

We asked the kids to write letters to their little brother to include in his coffin. They did but afterward they were in a broken heap trying to climb into my lap for hugs and crying. They were the first ones to get to my room when I started screaming, and they saw Brandon. The various signs of death had already begun to set in and to say they are traumatized is putting it lightly, though they don’t ‘seem’ to appear it. They saw blood pour out of their little brother’s nose and mouth when Aff tried to resuscitate him and on the emergency call operator’s instructions, turned Brandon on his side. Vincent and Rune had been hugging me tightly and had been frantically trying to calm me down, and they screamed when they saw that.

The children think they’ll die next, and nothing we say can disabuse them of that notion. If little babies who were perfectly healthy can suddenly die, how can we reassure them that they won’t die too? I’m wondering who put the notion that Vincent is going to go to hell in his head. I’m going to have to talk to the padre about that. Vincent is sure that his baby brothers are in heaven though.

Aff, Rhys and I are cracking. Aff can’t get over how unfair it is, that a baby so loved and wanted and so carefully taken care of just suddenly dies in his sleep; but realizes too that while his life was too short, Brandon had a good, happy life where he wanted for nothing, had not suffered a single day, and slipped away ‘having last been held by the one he wanted to be with the most.’ Rhys doesn’t want to try put away the baby things until after the funeral, or after we’ve brought Brandon back home; and his voice cracks as he says that. I’m desperately clinging on to every photo, video and memory; and sometimes I can almost smell his milky baby scent, feel his body lying against me, feel this odd twinge as if I am nursing him with my milk once again.

I cry and cry and cry. Why my children? Why did my two little boys die, and why do my remaining children have to suffer like this? Why Rhys? and Aff, who came into our lives with nothing but that pure desire to do something to help and protect, losing one of the children he’s come to love like a nephew?

I was asleep most of today – just couldn’t wake up enough to eat a proper meal. Aff made me soft boiled eggs and had to prod me out of bed to get me to eat. Then we talked about how tired we were, how it feels like someone beat us up. We all don’t really have an outlet for what we’re feeling, and we can’t really afford to smash everything in reach. Heck, we thought our printer had given up the ghost and talked about maybe taking it out to the backyard and smashing that to bits. Instead, while barely coherent from vodka, Aff fixed it and it let me print out the kids’ letters.

We also gave the funeral parlour the Monster Hunter There Are No Monsters Under My Bed onesie to dress Brandon in. There are no monsters in heaven, so it will be true.

The funeral is tomorrow and we’ll get Brandon’s ashes back sometime next week.

At this time, the silence is overwhelming. The house feels too big, emptier, and we wish we could leave.

Life is like a garden. Perfect memories can be had, but not preserved, except in memory, said Leonard Nimoy. We had two months and twenty days of memories. That’s all we have left of Brandon. Of Damien, we had only the vague memories of when I carried him under my heart; we did not see his face until he was born, already dead, but perfect, sleeping forever.

Aff is worried because I haven’t had any appetite. None of us have, really. But thanks to the wonderful people out there we’ve been fed even though we don’t have the heart to cook.

I’ve a concept for a set-in-the-past MHI storyline. The idea of the Combat Exorcists of the Vatican caught my imagination and as someone said, if I do nothing, nothing will happen. I can poke and prod at it at least in terms of concept while I finish Blessed Hope. Not this week though. No idea what I’ll do with it, but it’ll be written, maybe as a novella. Turns out I have several books on Catholic exorcism, written by Catholic exorcists that I can refer to.

I found a folder of Brandon photographs, videos and a sound byte of him crying that I’d recorded so my mom could hear his voice. I thought I’d lost them. They were from the time he was still in the hospital. We were so full of hope, because he was so strong and had been progressing beautifully, despite being a premie baby.

I even found a photo of Brandon listening to Two Steps from Hell from my earbud. 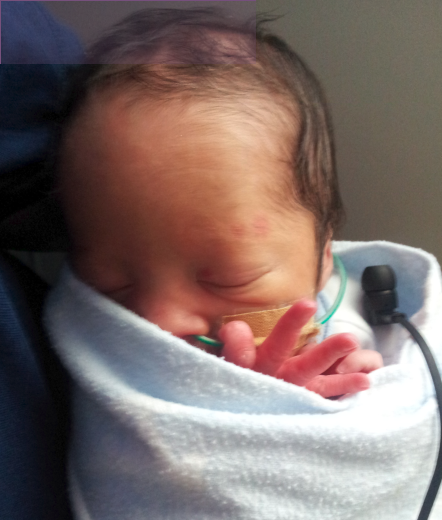 I also had some Pachabel (sp?) and Beethoven. Start them young on instrumentals, I say.

We settled on Gone Too Soon (Michael Jackson), You’ll Be In My Heart (Tarzan movie version) and I’ll See You Again (Westlife) for the music for Brandon’s funeral. The trailer theme for Interstellar strikes us as an appropriate theme of sad, lonely, but hopeful vastness; fitting music for that journey to the undiscovered country, but I think it’d take too much to explain to the people who’ll be there at the funeral. At least, this time, there’ll be other people besides us and our poor midwife there.

The paternal grandparents are going to be there. Unfortunately the great-grandparents can’t; and none of my family can be there, except in spirit.
I’ll do the medal Sarah was thinking of sometime soon-ish. Doing something helps distract, so don’t fret, Sarah! A friend* invited me to this thing called Sketchfest and I drew three sketches. It really helped in having me hang on to my crumbling self-control. And I’ve been worrying about Sarah, because, painting house so soon after surgery! I’m a nurturer by nature, I’ve been very recently told, because my first instinct is ‘mothering’ someone else. This is true, I guess. I’m like a bantam hen, and Rhys calls me his little chook.

I’ve been popping up here and there and if I sound happy in those posts it’s because I desperately need to take that metaphorical gasp of air before I get dragged down into this black tar pit of despair. Learning that there will be a MHI story written by Jim Butcher and several other excellent authors had me happy for some hours.

I know good people. I’m grateful that I know them.

*I’m not mentioning her name because I am aware Clamps is reading my blog and that of several of my friends (thanks to several friends making me aware of the mountain of stupid,) and he is already working on trying to make it sound like I’ve been spending the past few weeks pretending to be him on Disqus and possibly other places, in the hopes of discrediting the documented reality that he spent years stalking me. It’s really sad that he’s trying to catch my attention this way. I mean, come on now. I have shown that Yamamanama’s attempted to pretend to be me before, over on Vox Day’s blog, that he’s tried to get people to dogpile on me by misrepresenting me. Trying to pretend he’s the victim by blaming the victim is classic DARVO tactics. I still don’t know who he admitted doxxing me to, but we can count on them being the hostile sort.

He clearly cannot live with the notion that I have a much more important life concern than his harassment.

My son died and Yamamanama’s making it all about him and trying yet again to bring a hate mob to my door. I have to AVOID mentioning who is being kind to me, because that is an atrocity he must repay with harassing that person. My friend and her husband are some of those I consider lifelong friends because of the kindness and friendship they have shown me. I do not want them to be yet another target for him to focus on.

I mean, it’s bad enough I know that the person who threatened my children is likely celebrating the knowledge I’ve lost two precious sons and that my remaining children, my husband and my friend Aff are mourning, but really? This? I don’t fucking need this pathetic, no-life loser trying to hitch his overinflated false victimhood to my son’s death.

And having written that, I realize that Andrew P. Marston is pitiful, contemptible and pathetic beyond the ability of words to describe. He feels my attention is ‘stolen’ from him by my son’s death, so he works on trying to make it sound like I am stalking him and pretending to be him. He’s trying to compete with a dead baby for the bereaved mother’s (negative) attention. That’s… a surprising new low in his obsession.

5 thoughts on “Silence but for the tears and memories”