Jim Butcher has this to say about the Charlie Hebdo atrocity

It needs requoting, but you should also read the original post on his LJ.

“Still mortified about our fallen cartoonist colleagues, but free speech will always win.”

The history of the human race demonstrates /very/ convincingly that free speech is the /exception/ to the human condition, not the rule. For millennia, those who spoke out were imprisoned or killed. Hell, you could say something that wasn’t even subversive, just inept and stupid, and be destroyed for committing the crime of lese majeste.

Make no mistake. What we have today is a level of freedom and self-determination on a scale unparalleled in the history of our species. We live in what is, in many ways, a golden age. So much so that we give tremendous credit to the adage, “The pen is mightier than the sword.”

But everyone always forgets the first half of that quote:

“Under the rule of men entirely great, the pen is mightier than the sword.”

I’m not sure I know of anyplace that’s ruled by anyone “entirely great.” That adage wasn’t a statement of philosophy, as it was originally used: it was a statement of irony.

Don’t believe me? Look around. Notice that everywhere you go in the world, whoever happens to be ruling seems to have a great many swords.

Still, the idea contained within the quote is a powerful one–that intangible ideas, thoughts, and beliefs can have tremendous power. And that’s why we should be paying close attention.

After all, intangible fear can be mightier than the sword, too. Hell, it has been for quite a while now. Don’t believe me? Try getting on an airplane without taking your shoes off in the security line. While you’re doing that, try cracking a joke about having a knife.

That’s the power of fear, guys.

The threat isn’t aimed at our government or our borders or our resources. It’s targeting something far more precious–our identity. It’s changing us, who we are, how we live, and not for the better.

The Western world has got the biggest and sharpest sword the planet has ever known, yes. But the extremists are armed with a weapon just as powerful: Fear. And these nuts are really good at using it.

There is /one/ way that freedom, freedom to speak, to choose, to grow, to believe, to improve, survives in the face of violent attack.

Free men and women defend it, violently if necessary–or it dies.

It’s that simple. It really is.

We have to do it. 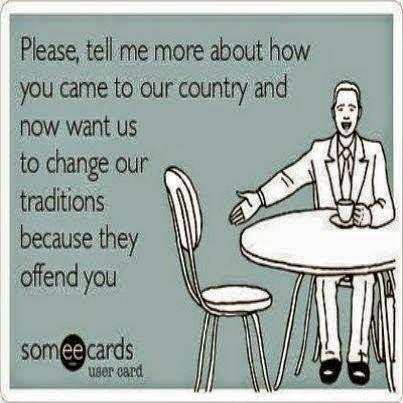 That’s a huge contrast to Scalzi apologizing to Muslims for what happened over in France. Hat tip to Vox Day on that one, since I don’t keep track of Scalzi.

Respect for Butcher, Correia, Hoyt, and so many others +++++++ infinity. This is a freedom of speech issue. This is a Western Civilization issue. It needs defending, or we lose everything.

Please contact [email protected]ary.com if there are technical problems with the site and I will forward them on to the techy person. Thanks!