One of the figure that I preordered over the past year arrived today at last. Orders for it began sometime last year and I saved up the funds to pay for it when it was finally released.

The figure in question is Card Captor Sakura Stars Bless You figure. I’ve long been a fan of the Card Captor Sakura series of manga and anime; and this was something my daughter grew up on. I haven’t yet unboxed the figure in question – only looked at it to make sure that it wasn’t in any way damaged. Happily, this figure arrived in perfect condition, and was well worth saving for.

END_OF_DOCUMENT_TOKEN_TO_BE_REPLACED

This started out originally as part of a comment over in Mad Genius Club which grew into a rant, which the little Rhys-chibi in my head looked at and said “My darling, that soapbox doesn’t go there.” So it has it’s own blogpost where I natter on because I can.

END_OF_DOCUMENT_TOKEN_TO_BE_REPLACED

I’ve been playing Lineage II again, and we’d been chatting about the computer I have, and Aff calls it “A small PC for a small person.” He’s not wrong – I’m only 4’8″ in height, and I have to sit cross legged in my chair because my feet don’t touch the ground.

Aff suggested I take pictures, and since he’s planning to hook up a third monitor for me to use, I decided that I should take pictures while my little system is conveniently displayed and decorated (those figures will be moved.) 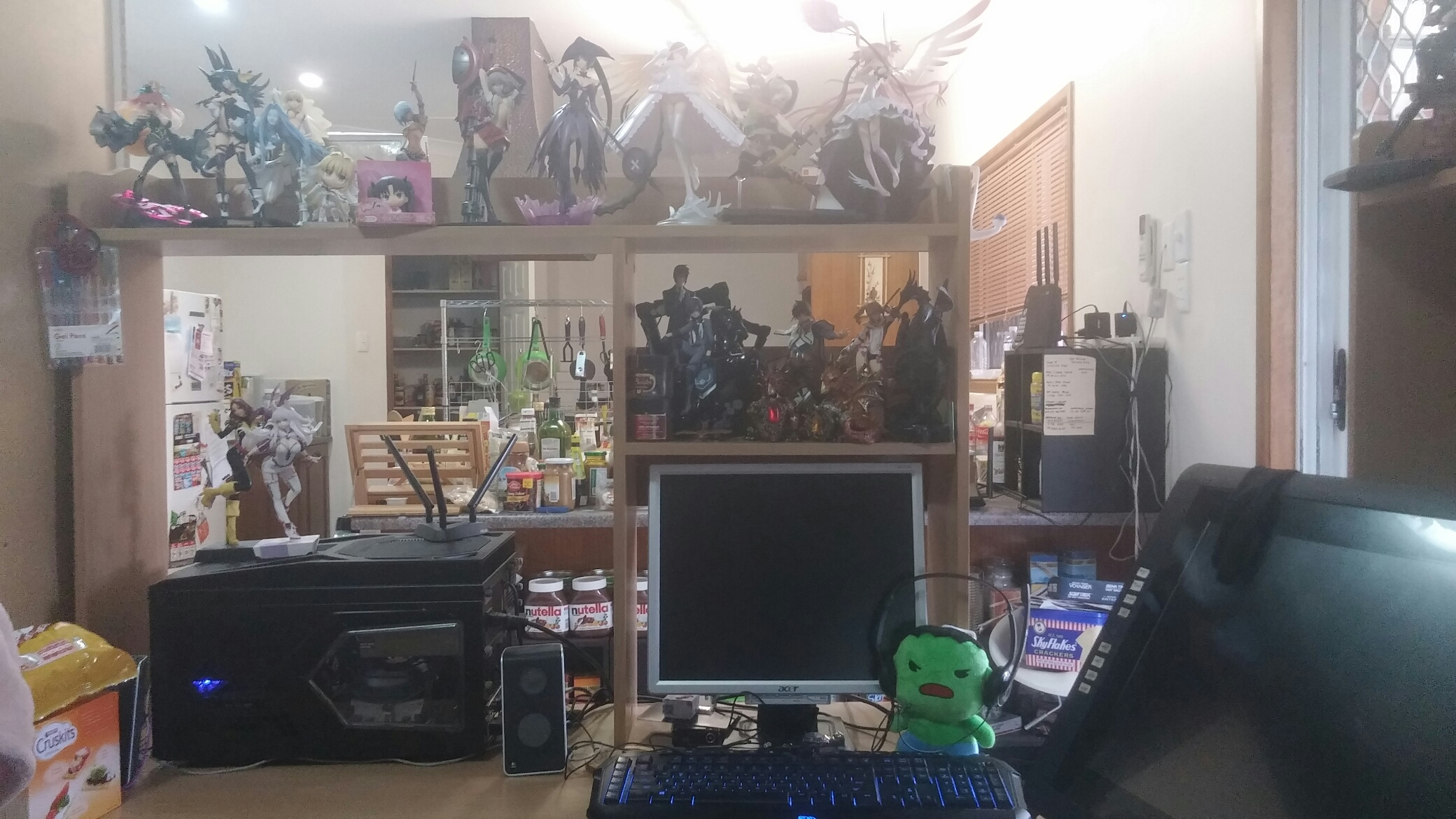 Since I was at it, and since I have added quite a few new figures to my display, I took this picture. That’s the Cintiq, and I was working on a practice pic, basically to challenge myself with drawing a complicated pose. I’m not sure I fully succeeded but I’m glad with the effort anyway, since I stepped out of my comfort zones in this piece. There’s plenty of mistakes, I’m sure. 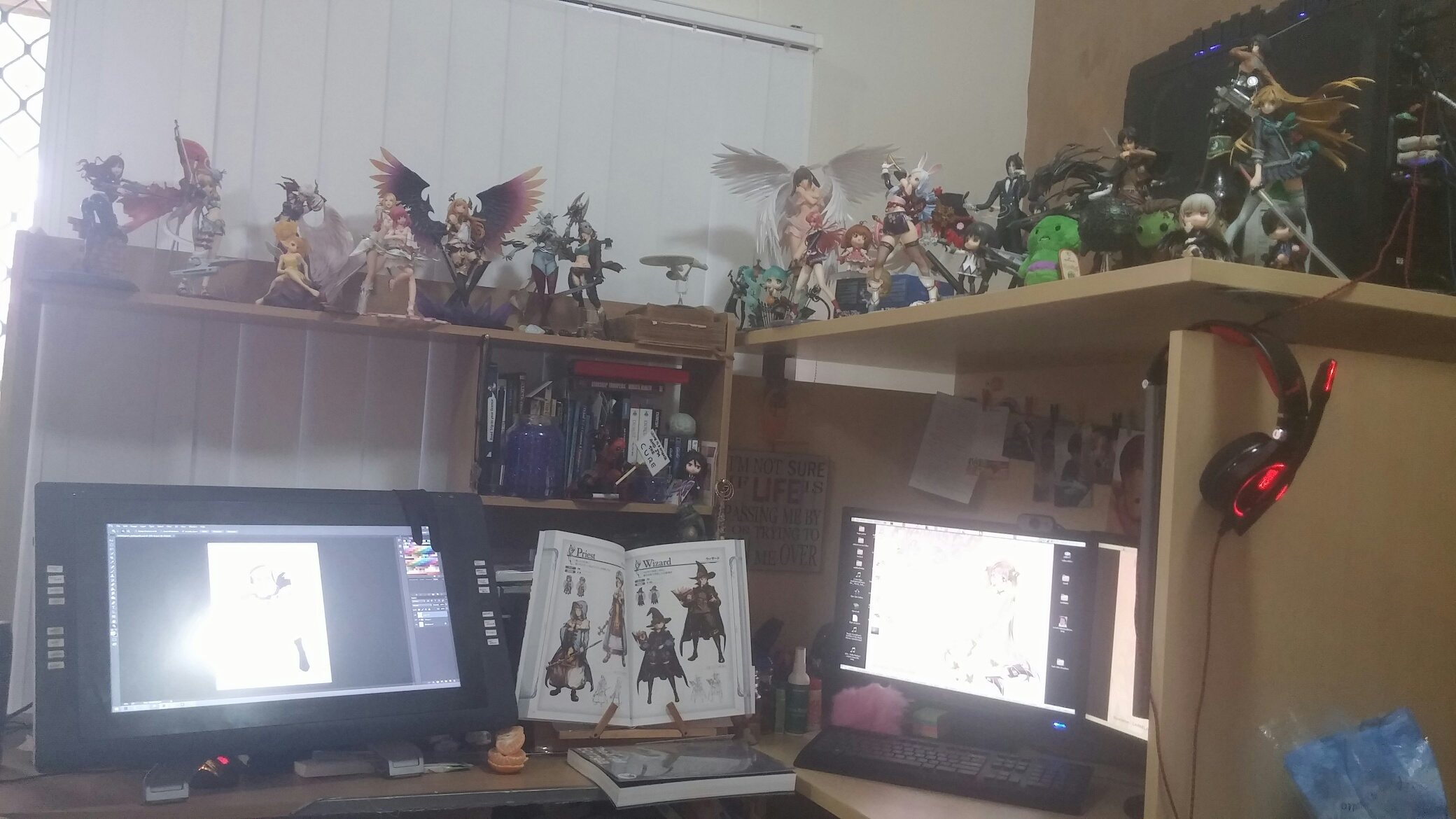 I’m not sure I fully succeeded but I’m glad with the effort anyway, since I stepped out of my comfort zones in this piece. There’s plenty of mistakes, I’m sure. Like I said, this was practice work, and I had fun trying the pose out, playing with colors, etc. It feels good to challenge myself, even if I don’t succeed in all my goals. I want to continue growing in skill, even if it’s little by little. 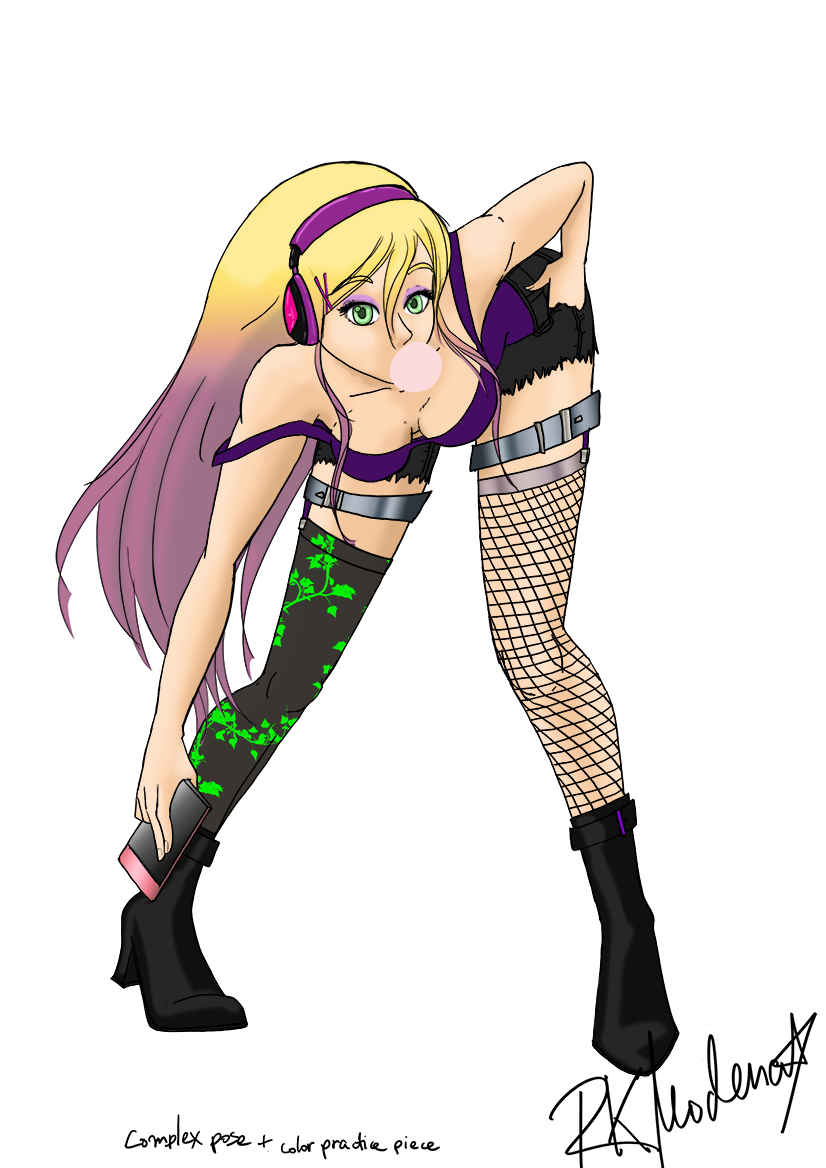 I got a parcel today – an artbook! It’s the leftmost one in this picture. I happily took a screenshot of my current set. I got really lucky that this artbook came back in stock. Lord of Vermillion III and Rage of Bahamut are games I don’t play (I think they’re Japan only since it seems like a CCG) but the artwork is gorgeous. 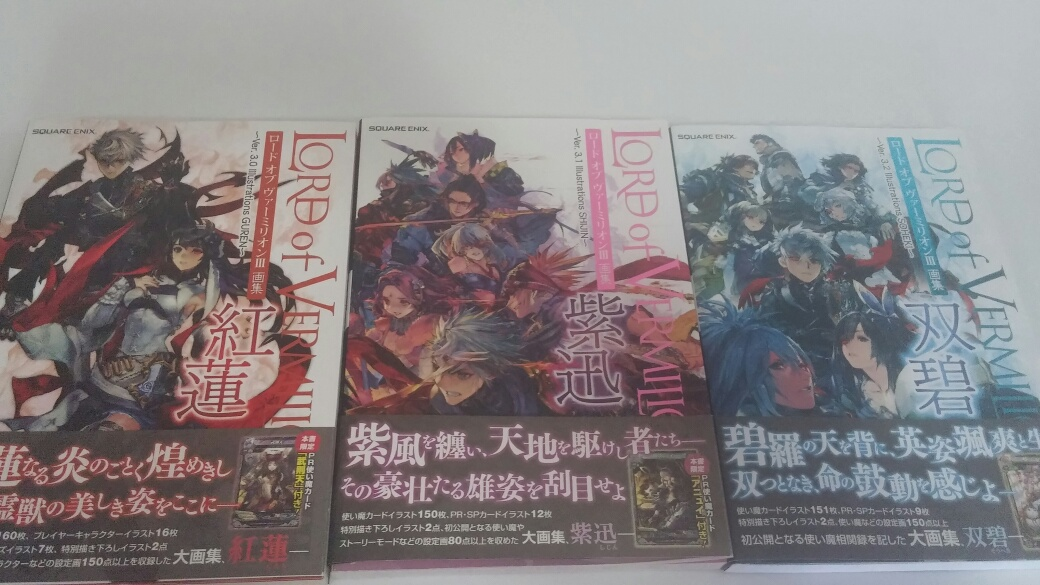 I paged through it and was happy to recognize some of Yamashita Shun’ya-sensei’s artwork. Here’s a pic. 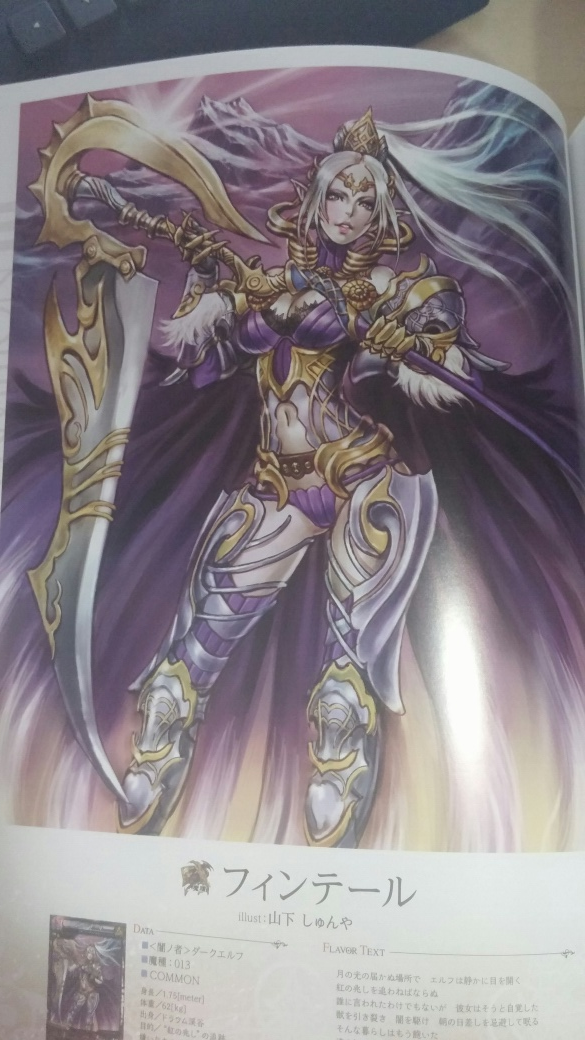 I’m very fond of game artbooks; so when I saw that this was available, I scrimped and saved to get it. Art for the Final Fantasy XIV game! 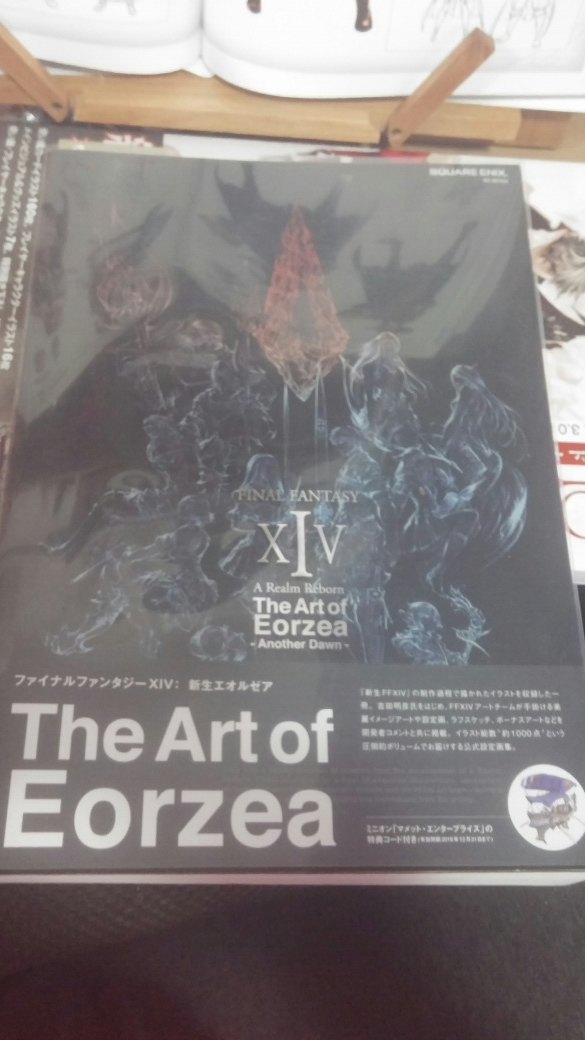 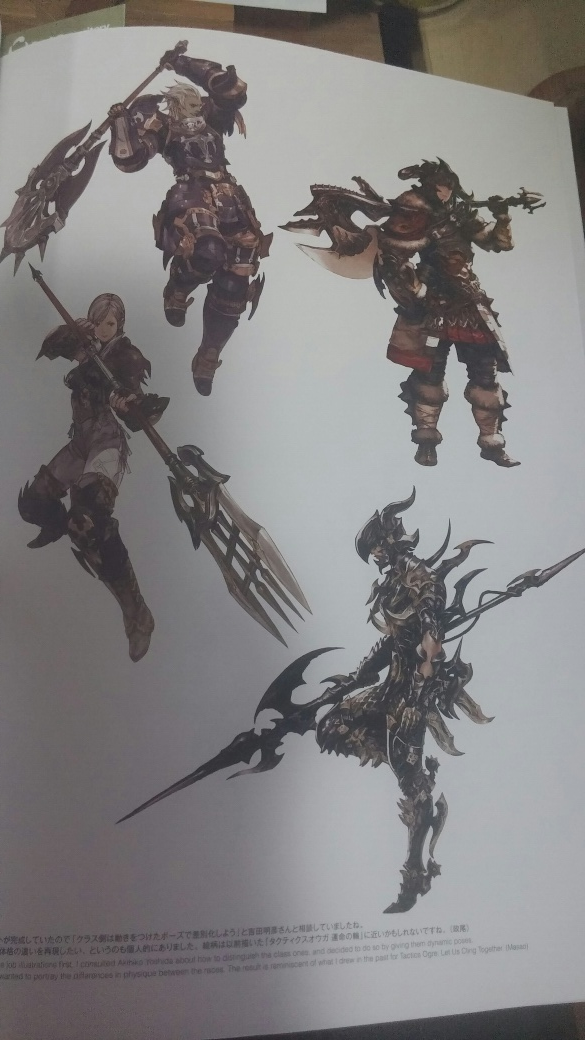 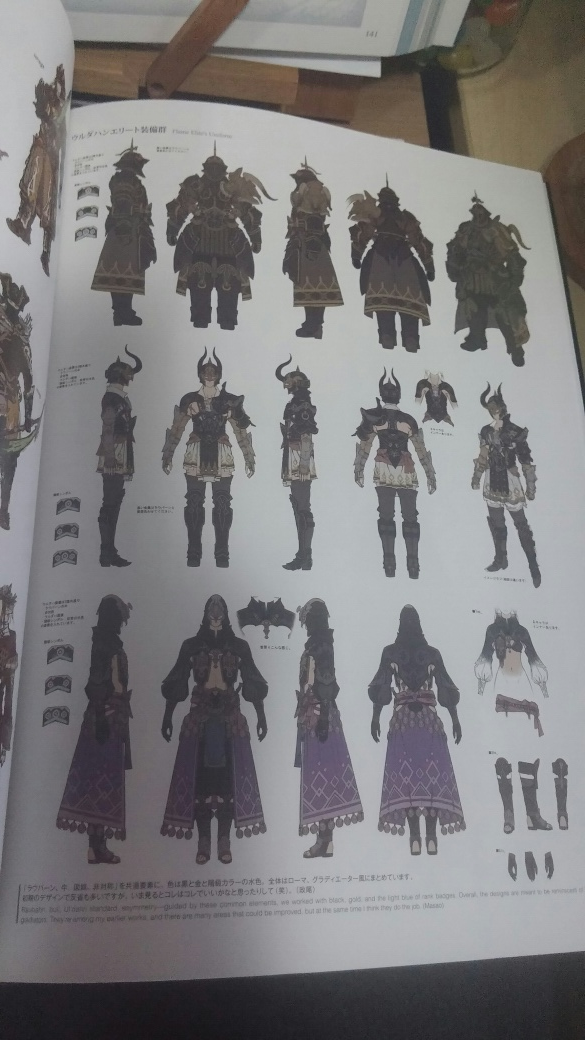 I just heard about the latest odd kerfuffle about the latest Avengers movie via Twitter, with complaints about Disney supposedly not having figures of Black Widow. I don’t live in America, and it’s been a while since I went into the toy section of a department store. Christmas, I think, in fact, when we went shopping for the kids.

I’m not going to talk about that though, but the mention of figures reminded me about something I haven’t done but was planning to do:

Write about one of my hobbies, which is collecting figures (and the related hobby, artbooks from Japan, and artbooks in general.) I originally planned this as an exercise in writing, and since it’s a good idea as well as to keep my mind occupied (instead of constantly missing my baby boys who are now angels), I figure (ha!) I’ll make it as something of a review. I’ll do that next time. For now I’ll just talk about these, because I got distracted by a Skype call between my siblings and mum and myself.

Since the chatter about Black Widow is what kicked it off, here’s my figure of Black Widow, based off of Yamashita Shun’ya’s artwork. (Fantastic artist, by the way; go look.) Released by Kotobukiya, you can purchase them via Amazon (I prefer to buy via a Japanese store; because the shipping is cheaper for me.)

In retrospect, she looks a bit like Scarlett Johansson.

Here’s another one done by him; Kitty Pryde! I had to jump on this one because Kitty was one of my teenhood favourite characters.

This one of Deadpool was a surprise; the figure displayed in the place I buy them from had a sword, or a hand gesture (It’s not flipping the bird and I can’t remember what it’s called – forefinger and pinky raised).

Unwrapping the figure when it arrived, there was a little whiteboard and a whiteboard marker. It was funnier, so I put that in his hand instead of the other katana. Because it’s Deadpool XD

I have him on a shelf, looking like he’ll pounce on Briareos.

Unlike most other figures, Deadpool is held in place by magnets; and his base is a metal plate. Out of curiosity, I stuck him on the magnetic whiteboard to the right of me.