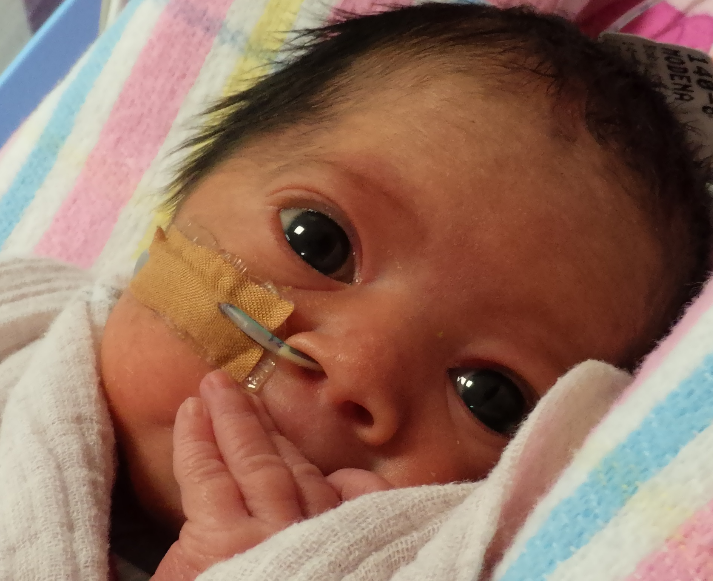 She has her father’s big eyes, only grey.

Our daughter, Jaenelle, was born last week via a medically necessary c-section, early at 34 weeks, 4 days. She is thriving and perpetually hungry, since she has a lot of growing to catch up to. While she is in the NICU as she is prematurely born, I’ve been informed that she does not suffer from things like apnea or breathing issues, and just needs to feed and sleep enough to catch up to growing to her term size. Looks like the corticosteroids worked a treat on her lungs!

The surgery was required as I had placenta previa and a front-lying placenta. I learned something new: you can have a c-section where you cut through the placenta! I was put under general anaesthesia for it, so I didn’t see that, but Rhys was allowed in to take pictures of our baby after she’d been taken out of the womb and cut the cord. Already all that was more than we had hoped for! After finding out that Rhys had worked with sheep slaughtering, the surgeon allowed him to peek at the sewing-me-up procedure (since Rhys was being sensible and staying out of the way) and gave permission to take a couple of pics for me to see. I’m sure that we’ve made an impression as That Weird Couple.

I am still in hospital with post-natal complications (pulmonary embolism, infection), which are being handled. I do not mind the extended stay in the hospital (I’d already been here a good 3 weeks before the surgery due to pregnancy complications regarding blood pressure) as if anything goes wrong, I’m at the best place for that.