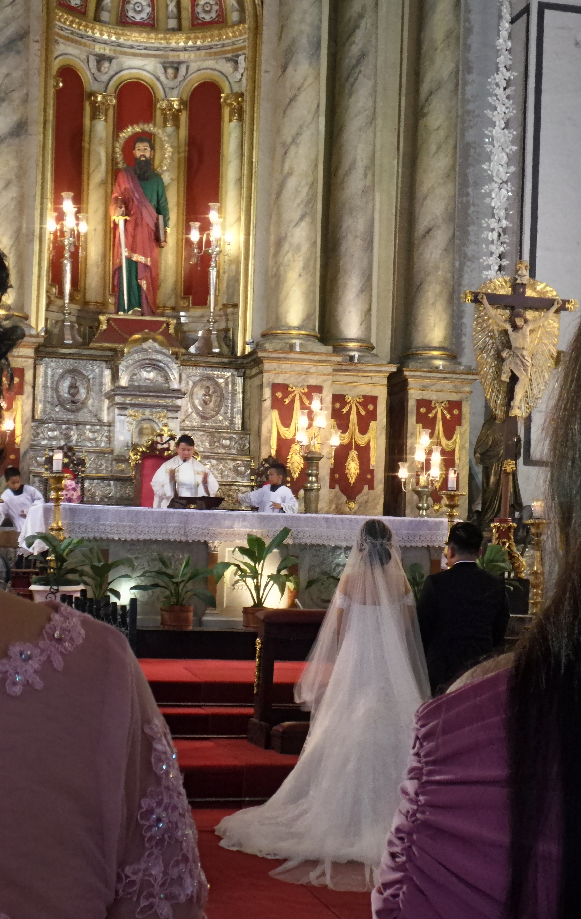 The wedding had all the ceremonies observed; we did our parts too!

The family all visited the Philippines for the first time in 6 years; for my youngest brother’s wedding. It was a short visit, hectic – but ultimately fun and wonderful. I sadly didn’t have time to interview my Mom for stories as I would have liked (so I can start writing those family stories), but she had fun being Lola to her (currently only) grandchildren, and ‘spoiling her baby daughter’ – so I have a load of daster dresses (yay!) and having Rhys and I eat with her at her new favourite food places. I went home with the intention of being able to eat some of the foods I seriously missed while overseas, and while that ambition was partly fulfilled, I feel rather sad that I didn’t get to sample more of the smorgasbord that is Filipino food and restaurant variety.

We didn’t have the time (it was late at night) to try this challenge, alas.

(To our amusement, the kids simply adored Jolibee, though Vincent found the burgers ‘too small’, and Rhys could eat three Filipino-sized servings of food by himself.) I didn’t get a chance to eat fishballs, or Goldilock’s Cathedral Windows, but I did manage to have some Red Ribbon (and introduced Vincent to the joys of mamon, that fluffy Filipino angel food-sponge.)

I did bring home lots of powdered juice mixes and Mom, upon finding out that Nescafe Berry Coffee was something Rhys – the consumate tea drinker – deeply enjoyed, made it a point to ensure that her only son-in-law had a package of single-serves to bring back to Australia. Note to self: next time, bring even LESS clothes, and bigger suitcases for the children, because while I sent home two balikbayan (return to homeland) boxes full of pasalubong (‘welcoming’ gifts) we got given so much there’s a huge plastic chest of stuff we couldn’t fit on our baggage allowance (30kg per person) that Mom says she’ll send in parcels – with more food things that we liked, but didn’t get a chance to bring home more of. (Waah, I realised just now I left behind my little cookies with the little drop of hard icing on top. I wanted to nibble on those while on the plane ride home!) The pasalubong will mostly go to folks my Mom knows; as they’re mostly ‘thank you for taking care of my Mom for me’ appreciation gifts.

I will have to learn to make taho myself though. =/

There were also reunions with my college friends, and WHEE geeking out and laughing and – oh, it was fun. Whimpering over books in Fully Booked too – and going “NOOO I CANNOT, BAGGAGE WEIGHT LIMITS! /sobsob” – and most of us hadn’t changed … or visibly aged either (the greying hair doesn’t count; we all looked much the same otherwise, apparently!) Everyone loved the pots of cheese I brought home in our luggage, padded and cosseted, all arriving intact. I missed having that kind of get-together, since geeking out with them has been something that we haven’t had a chance to do in ages and ages. It was lots of fun, and delicious cake was had.

The wedding itself was a huge, memorable event – Rhys and I were what they called Veil Sponsors (we drape the veil on the bride and groom, and take it off later in the ceremony), and the kids were Candle Sponsors. It was very much a Filipino Catholic wedding, held at the historic San Augustin (Agustin?) Church in Old Manila / Intramuros. 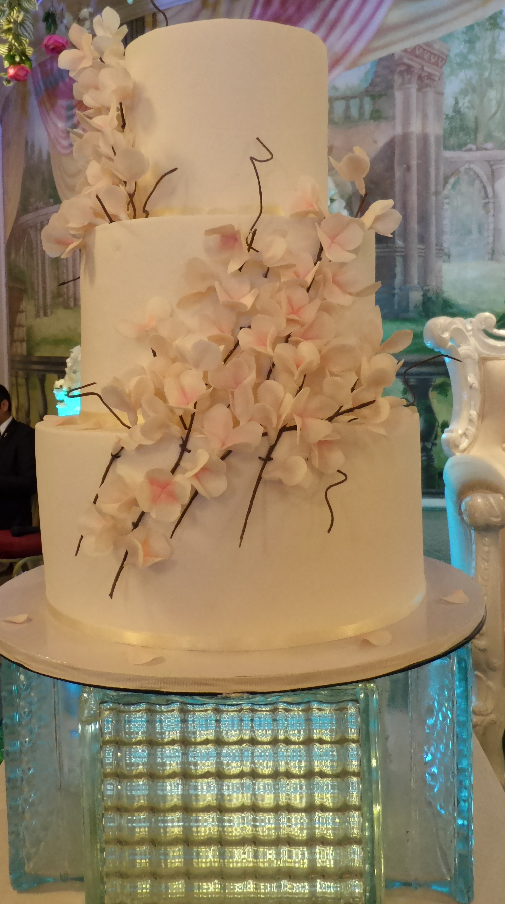 Each tier was a different flavor =9

The reception was at the Manila Hotel, and was loads of fun (and since Rhys, the kids and I were part of the retinue, we hammed it right up). As the only sibling there, I was asked for a few words, and in typical form fired off a coherent and well made speech completely off the cuff (though I’d had time to think about what I wanted to talk about beforehand.) Recounted the story of how they got together (Mom, other sis-in-law and I hit him with a cluebat) and apparently outside of his relationship with his blushing bride, Youngest Brother still hasn’t got much in the way of facial expressions. I managed to slip in a joke teasing my brother by appending “Stark” to his name, because he looks like an Asian Tony Stark; I later got told by my brother that his coworkers all loved my speech.

As far as we’re concerned though, this wedding is merely a formality; my youngest brother’s bride has been ‘part of our family’ pretty much from the day the two got together (they are each other’s first love, first everything, and we simply adore her to bits.) Rhys had the fun of making her blush every time he called her “Mrs. Modena” – yes, she’s that adorable and cute. Great head on her shoulders too, strong spine, lots of heart. They’ll be very happy together. (They have regular monthsaries!!! ) 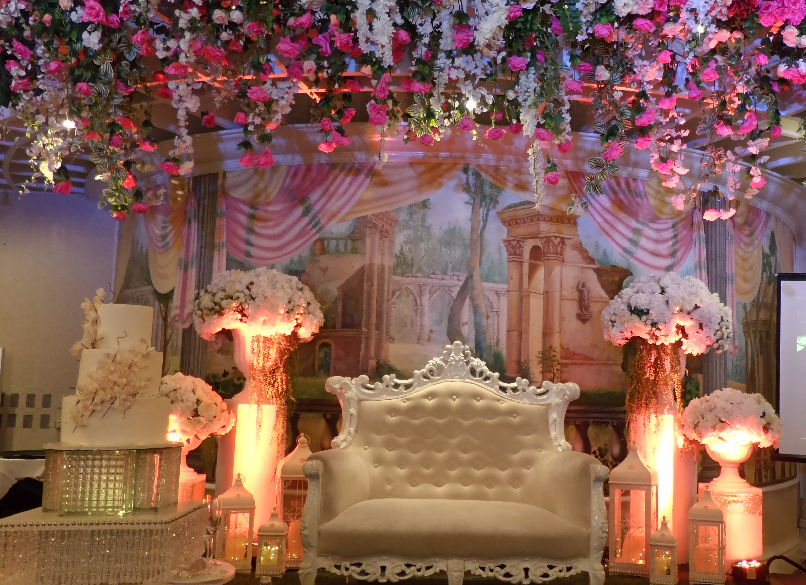 Their wedding photographer had a very romantic, artistic eye, incredibly professional and impressive. (I got to tease the bride while they were doing some pre-wedding ceremony photographs, so it helped. Rhys did the same to my brother and his groom, so ha!)

I wonder how long before my kids have cousins ^_^ But I’m not worried on that score. Brother and sis-in-law were disciplined enough to wait for their wedding night (11 years!); I reckon they have a plan.

Of course, there’s the bringing pasalubong presents back from over there! (We Filipinos do a lot of gift giving!) We brought four bottles of lambanog, coconut vodka as the stuff is called in English, and two were for Rhys’ workmates, as part of my ‘sorry I had to take him away for 2 weeks, have liquor.’ It was greatly enjoyed as very delicious, along with ‘holy shit, it’s that cheap? Seriously??!!!’ along with Rhys telling them how cheap rum, whiskey and such were. (“I gotta go to the Philippines just for that!”) and the empty bottles now have a place of honour in the officeplace (because the stuff was yummy, and the gecko design in front was considered cute.) I briefly researched into how lambanog was made, to see if we could try distilling some on our own, but they use the coconut sap, specifically tapped from coconut flower bunches, so I would need an entire plantation of coconuts to do this. I did see a method of using coconut water to make coconut wine, but that’s something to try in the future (making one’s own wine is apparently ok here) and it’s not lambanog.

One of the things I wished we could’ve brought home were the massive 3 liter or so bottles of Chivas Regal being sold at the airport duty-free. Because massive bottle, and we were discussing whether or not we’d get hit by liquor taxes.

There’s stuff for my in-laws, and brother-in-law’s request was ‘interesting snacks.’ I’m happy that we were able to get the okay from Australian customs to bring them in (being mostly cooked, baked or dried things helped.)

Vincent brought his girlfriend and himself a pair of matching carved necklaces, which was the cutest thing ever. She went ‘squeeee~’ over Vincent in a suit, and Vincent blushed. Her mother and I did not help, and aggravated the blushing. 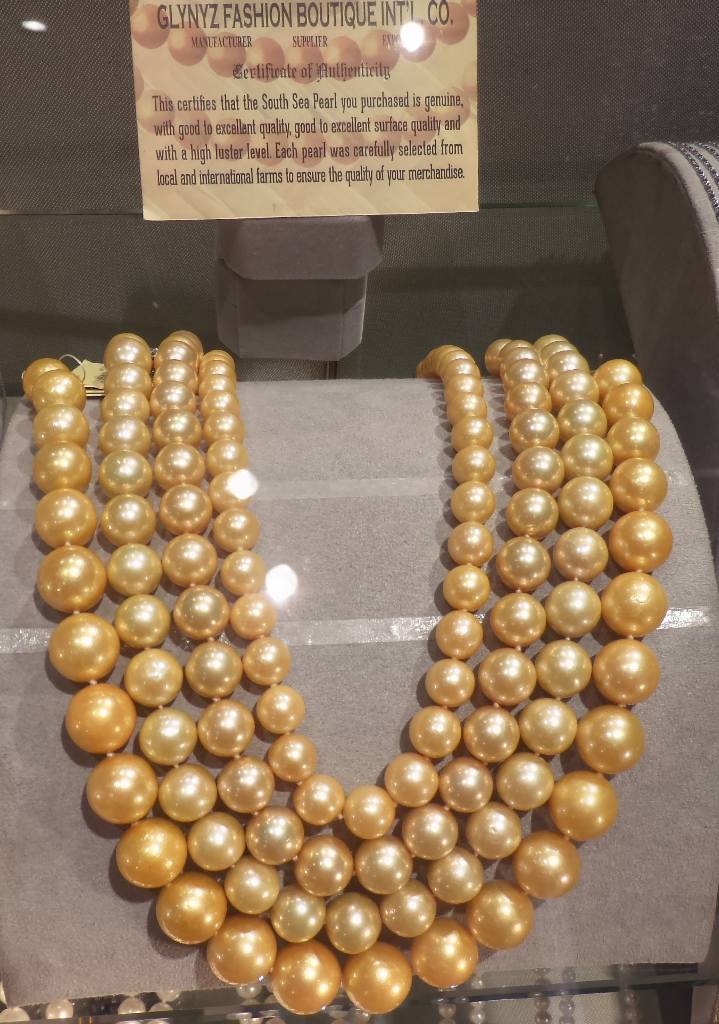 We didn’t buy this (they cost well into the six figures), but I had to take a photo.

The one seriously splurgy thing we got was a South Sea Pearl brooch, which we got on a sale. It is also suitably Australian, which is why we liked it so much. Mom got me a lovely set of faintly gold-tinged freshwater pearls (much cheaper, but gorgeous) that I wore yesterday and my bird found fascinating to chew on. So while I love wearing the pearls, I’m not wearing them today.

I’ll admit I burst into tears whenever I got into a mother-daughter cuddle. I have missed being hugged by Mom!

We’re still getting over the jet lag and pretty much went straight back to everyday living since we got back. sigh But that was to be expected. I’m more surprised at how quickly I settled back to cold weather (compared to Philippine humidity and heat) because usually that sort of change would have me down with a flu for a little while.

I forsee myself experimenting with food and flavors, to make ‘copycat’ versions of some of the food we had enjoyed over there. Sometimes, it’s the little things, like the sauce, that really make a dish.

This has probably been here for a long time, but I never went to Manila proper much, myself.

Things I did not expect to see while there: A Trump Tower, ASUS stores, and a massive proliferation of Daiso, Japan Home Centre, Miniso and Uniqlo stores (Japanese brands.) I’m actually rather jealous about the latter shops, because the Japanese cheap home-stuff stores are great for cheap but surprisingly sturdy cookware and bento and baking stuff.

The main source of energy is a car battery apparently…

There is a proliferation of three-wheeled electric motorcycles everywhere now, which in typical Filipino form, also end up as family transportation. I saw more of these in Marikina than anywhere else; we thought there were cool, kind of like souped up mobility scooters in a way. On reflection, I wouldn’t be surprised if they were souped up, Filipino-ized mobility scooters. 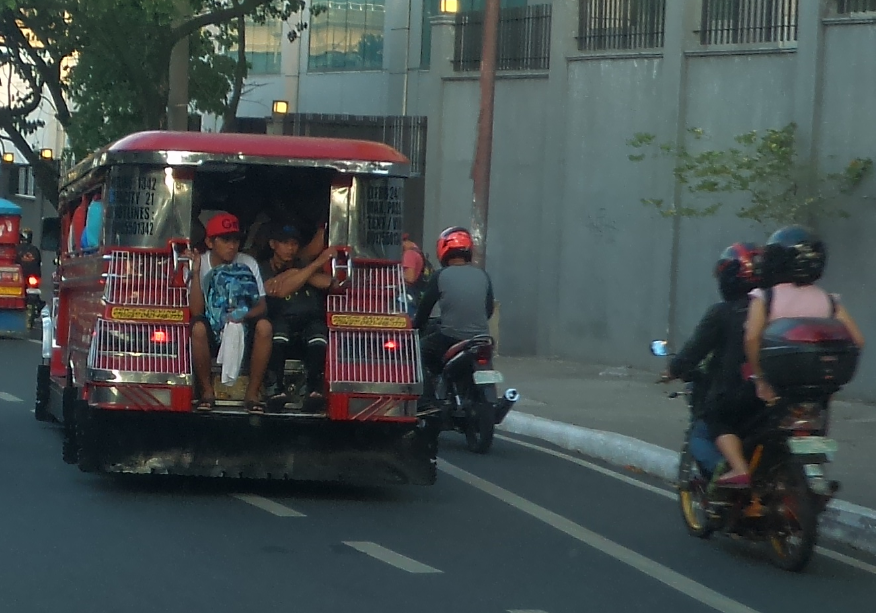 These guys though sat on the floor of the jeep.

However, some things still haven’t changed, like the people who hitch a ride on a jeepney, while clinging (sabit) to the framework. We had to explain to Vincent that there were times I had to do that, and his dad did the same. He was a bit shocked, but we told him ‘when you want to get home and it’s hard to find a ride, you do what you gotta do.’

Manila traffic is still pretty bad, but if you were on the road around 10 AM during a week-day, depending on where in Manila, it was workable. Still, it’s something I don’t miss.

The stuff I do miss are the important things: family, friends, food. ^,^