I’ve been dragging myself out of bed to work on commission art (11… or was it twelve?  Sexy Desktop ladies, a book cover and some other stuff.) Sold a computer that was sitting idle to someone who needed it in an instalment plan; and I’m hoping to get a battery for my little netbook soon. I wish I could afford to buy a portable Cintiq and a new computer for the bedroom so that while I’m too sick to sit up I can draw in bed and keep working. At least with the netbook I can write while in bed and it’s not bulky. (Ok, theoretically I could write with Ayumi the super tiny netbook but I need new glasses first.) However, writing with an objective as opposed to rambling requires the ability to concentrate and focus, so alas, no essay or story writing for me. I REALLY NEED TO GET NOT SICK. The only reason that I can still draw is because I don’t need to be coherent or make sense when drawing. I can draw without worrying about whether or not my grammar is being infected by German or French or did I just insert the Japanese borrowed term for something I just wrote…

We’ve been flat out this last few weeks. I’ve got commissions from people who want Sexy Desktop Lady backgrounds (and I’ve been told for most of them “whatever you wanna draw is fine! – as long as it’s a pretty girl) – most of them from people who are also asking Aff to do system builds for them.

One of the customers brings us Maccas whenever he drops by, enough that Aff says that he’s waiving the standard fee but the customer says it’s so he doesn’t feel bad that he’s eating all by himself.

On a happy note, I’ve a nice pile of manga, and artbooks and books that arrived today. I had a nice stack of Skip Beat omnibus volumes arrive the other day but I forgot to take a photo. 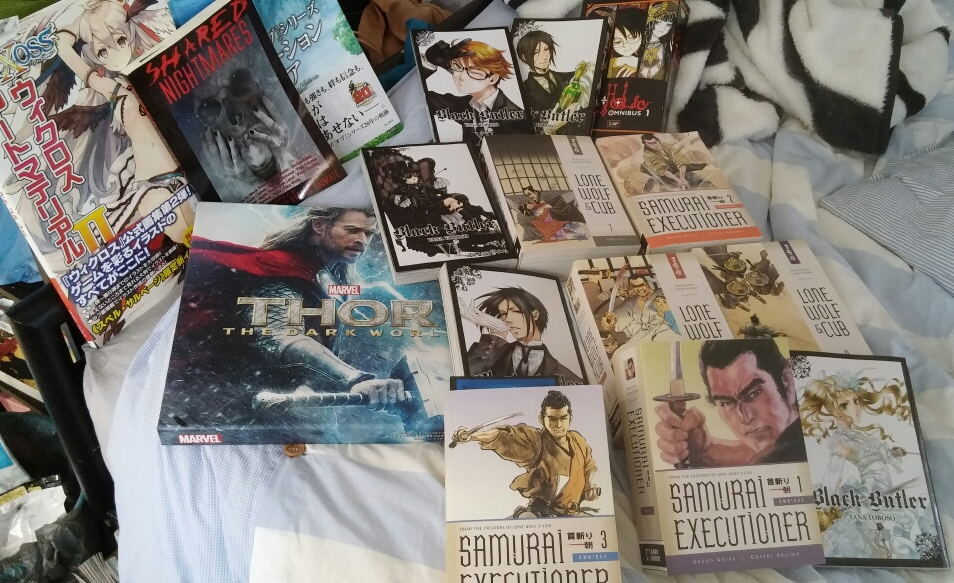 If this sight makes you itch for some new reads, I found out via some helpful Twitterfolk that the November 2015 Baen Book Bundle can be ordered. Larry Correia’s Son of the Black Sword is there, as well as Mike Kupari’s new book, and a bunch of what look like really good reads. I’m going to wait because I kinda smashed my book budget already so it’ll be sit and wait again.

Leaping off that tangent into another, ff you read science fiction and fantasy, you’ll need to read about one of the biggest scandals in the genre, which is “Breendoggle”, the thing that the anti-Sad Puppy people seem find LESS objectionable than Sad Puppies, simply by the dint of the NOISE that is made about Sad Puppies versus Breendoggle. The Story of Moira Greyland is heartbreaking to read, and she talks about how she was repeatedly raped and molested from the age of five by both her mother and father, both of whom are big names in science fiction and fantasy. One of the things I’m sure that lots of people will find objectionable despite what happened to Moira is the fact that Moira wonders if the lifestyle or the sexual identity of homosexuality has something to do with what happened to her, as she describes by her account that she was constantly being told that she was supposed to be a lesbian and pressured to be one, and that her parents were upset that she was born a girl. The comments only serve to prove this disappointing line of thought true.

In the vein, however, of that blog, she raises a point that shouldn’t be ignored, even if you support gay marriage in any way at all (like I support the concept, but not how it’s being executed or pushed for.) This is part of the whole ‘flip-side’ thinking that a lot of people don’t try to engage in any more – which is, contemplate the other side of a situation.

In this case, if the ideal situation of a child who identifies as gay is born to heterosexual parents, the parents accept their child’s homosexuality, then ideally the reverse is also true: that gay parents would accept their child’s (adopted, or partly biological/surrogate-born) heterosexuality. However, the question that is raised by what happened to Moira (aside from the rape) is whether or not this is happening, if heterosexual children are given the support they need, and whether any children at risk are actually given the protections they need (from both the ‘sides’ of homosexual and heterosexual parents). There are stories out there that give rise to doubt that equal treatment is given in this case; and it is clear that abuse happens to some children regardless of the orientation of the parents. However, my point is, is the discussion happening, and if it does, are those discussions being policed on whether they’d be perceived as ‘bigoted’ or ‘anti-gay’ or similar threats and fears?

For me, the core thing of being a parent is the ability to prioritize the child’s needs, safety, and future over the parent’s wants. This is true regardless of whether or not the parents in question are heterosexual or homosexual, or married or not. Parents need to ask themselves if their identity -whatever that may be- is more important than ‘parent.’ It tells the person what is their greatest priority – themselves, or their child? After all, having a child means you’re setting aside a massive chunk of one’s own time, needs and interests aside for the sake of the child. Simply put, if a person pondering parenthood puts being ‘gay’ or ‘heterosexual’ or anything else over ‘parent’, then perhaps they should rethink becoming parents. I do not think there should be a qualifier before the ‘parent’ part. It does not matter to me if the parents are gay or not; what is most important is whether the parents consider their children the most important thing to them.

The response on the Moira Grayland story makes me wonder indeed, if the honest and necessary discussions occur, as opposed to devolving to mere accusations of being hateful.

Can such discussions occur? I’d like to believe that they are, because I don’t know if they are.