This being the Philippines, our practice of Catholicism may seem very strange to even other Catholics. I don’t know if the tradition of a visiting saint or Jesus or Mother Mary statue is common outside of the Philippines, but it happens. Usually (and this is the rough description from someone who hasn’t been involved in the process,) the caretakers ask if the statue (Usually a Mother Mary statue of some kind) will be welcomed to the household for a week’s praying of the rosary and novenas. It is done to bring blessings to the household; and daily from 3pm to 4pm, a full 15 mysteries of the rosary is said by a group of people, including the caretakers, praying for the family. Then afterward there is a bit of snacks and tea and coffee.

I had to consult with my mother because this story happened when I was quite young, maybe 7 years old, and requires a bit of a background story. I should note this doesn’t quite fall under ‘folklore’ and more ‘religious experience.’

We were about to leave for Germany, and my mother wanted to visit her home(town? Village?) of Naguilian one last time, and spend a little time with her mother. Dad agreed, so my brother, our nannies, and my mother and I went up north to Isabella. One of the things my mother also wanted to do was ‘bid farewell’ and pray in the presence of a specific statue of Our Lady of Grace, which our family has had a devotion to for a long time. This particular statue had belonged to a woman in the area named Manang Velli, who lived, as the story goes, around the same time as Padré Pio, and like him bore the stigmata, and around whom several miracles were witnessed, such as the sweating of blood, the stigmata manifesting, and showers of rose petals, which when dried, would have very vivid images on them (such as those of the Virgin, or Jesus, or the Crucifixion) . I don’t think she has been acknowleged by the Catholic Church properly, but she is revered as a local, if unofficial saint. Manang Velli passed away and it is said that her grave was opened at a later date, and her burial clothes found neatly folded, and her body gone. The statue is said to be in the care of some of her kin / or her followers, and through a visitation in a dream, the Virgin Mary directs them to the household she is to visit next. The caretakers of the statue then do as instructed, and bring the statue of Our Lady of Grace to the household. Normally, if I remember correctly, she is housed in a grotto and sometimes she’ll return there. 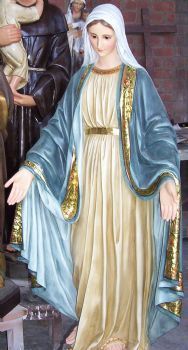 Image of Our Lady of Grace statue found on Google.

So when we arrived there, on a Friday, my mom asked her mother if they could visit the grotto. Mamang (as we called mom’s mother, or she was otherwise called Lola Iling) said that my mother had come too late; the Mama Mary had gone wandering and had just left the area (or the village!) My mother was quite disappointed, but it couldn’t be helped.

The next day, one of the uncles (one of the older male relatives, who could’ve been an uncle or an older male cousin) came running to Mamang’s announcing that Manang Velli’s Lady of Grace was coming to the house! Apparently the caretakers were given instructions to turn around and go back rather suddenly. This was a very important event and the whole household was a flurry of activity. My mother asked that my brother’s nanny keep us out of the house when the novenas were being said and I remember being asked to stay away when people were visiting, so we wouldn’t disrupt the prayers. The statue of Our Lady of Grace was placed in my grandmother’s front room/living room. She was tall, a ‘life size’ statue.

During the morning though, I could visit the statue of the Virgin where she’d been , and to this day, I still think of her as the most beautiful image of the Virgin I’d ever seen. I’ll admit being very drawn to her, and being very happy in her presence. I especially liked to hold her hands. My mother remembers seeing me doing this, “As if you were talking to Mama Mary.”

I remember thinking that the image was lacking in something, feeling very strongly that she should have flowers in her hands. So one afternoon I hurried off, to get flowers, my little brother Al and our nanny Ate Vilma following in my wake. The only places I knew of that had flowers, however, were my grandmother’s garden, which didn’t have any that ‘suited’, and the village church, which didn’t have any blooming at that time, and the only flowers I could find were a daisy-like bloom that was part of the grassy fields.

I gathered them up, the nicest looking ones I could find. They aren’t very pretty flowers; big yellow pouf of a center with the pollen, and five small petals, but for some reason that didn’t seem to bother me just then. When I felt I had enough, I got up, and ran straight back to my grandmother’s home.

Mindful of what my mom had told us to do – stay out if there were people in the living room – I peeked into the room from the front door. It was empty! All I could see was the Mama Mary statue in one end of the room, with sunshine filtering in through the windows, motes of dust dancing in the air. I remember it as clearly as I see the screen on which I type. I darted inside, and tried my best to arrange the flowers in Our Lady of Grace’s fingers so that she was ‘holding’ them. When it was done, I felt happy; she finally looked the way I thought she ought to: holding flowers in her hands. I didn’t question that happiness and satisfaction – simply accepted that it felt right.  Finally she looked complete to me. Perhaps she should’ve had roses, and if I’d found any that ‘looked right’ I would have brought them back.

I ran back outside, to find Ate Vilma and Al just outside. We went out to play in the back yard and I don’t remember much of the rest of that day.

All this slipped my mind until one afternoon a few years before I left the Philippines to move to Australia. My mom and I were sitting at the dinner table, chatting, and I remembered that day. My mom contradicted me, saying no, the room had been full of people, and I’d run into the room, put flowers in the hands of the statue, and run back out.

From her side of the story, everyone had been in the middle of praying the rosary when I suddenly came in through the front door and went to the statue. Mom was very worried that the old ladies who were the caretakers of Manang Velli’s Virgin Mary would get upset that I wasn’t behaved enough to mind my elders, or for disturbing the prayers. She watched them as their eyes grew wide and round as they watched me put flowers in the Virgin’s hands.

But when they approached her later, they asked only if I had been baptized, and if I had been taught to pray, and if I knew how to pray the rosary. My mother showed them my little white prayer book, and the children’s rosary I had gotten from my school, Stella Maris. From the way the two older ladies had behaved, something important had happened, but whatever it was, they weren’t telling her.

When I found out that my mother had seen me, I told her I would never have gone into the room if they were still praying. I wasn’t going to risk a spanking – which I would’ve gotten! – and it had been impressed on me that it was very important that I not disturb the prayers. In fact, I was surprised that, according to her, I’d gone into the room full of people and disobeyed – and I didn’t get even the least scolding.

I think my mother believes me (I was pretty well behaved as a kid) but until that day I didn’t know there had been people in the room.