I’ve an update up on the Yamanama aka Andrew P. Marston the Stalker PSA thread. It is a rather epic illustration of how some people are apparently placed on this planet to be horrible warnings to the rest of the human race – and possibly others as well. Andrew P. Marston of Marshfield, Massachusetts, is clearly one of these things. Over the years, he has displayed absolutely appalling levels of misogyny and racism towards myself, shown himself to be a liar and a stalker who holds the most absolute of double-standards of ‘not for thee but for me,’ has no problems violating laws or invading his victims’ privacy when it suits him to do so, has no issues with harassment, defamation, slander, public smear, misrepresentation and intellectual theft as long as he’s the one using them, but the moment that anyone tries to defend themselves, fights back, or exposes him, he attempts desperately to implement  DARVO tactics 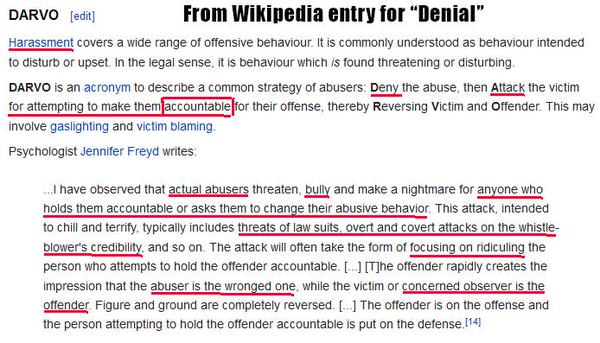 Happily the attempts to do this to myself don’t work, as I’ve carefully kept a public record of his words and harassment over the years. Since I’m doing the unthinkable – a little Asian woman daring to defy the white-man-bully that he is- he makes the completely unfounded claims that I am the ‘stalker’. This is very clearly not the case and his behaviour as a whole has remained entirely unchanged throughout the years, at least since the documentation I’ve seen of the last group he harassed back in 2005.

Notably Yama aka Andrew is very keen to have the records of that incident erased, as it documents his use of pornography and illegal pornographic content, in a deliberate attempt to expose two eleven year old girls to it – something he did because he wanted to punish the mother for her beliefs (Which, I grant, are unpleasant since she’s a white supremacist) but note that Andrew P. Marston went after the children, not the mother. This was something he felt was completely acceptable to do. This in turn makes his threats towards my own family quite credible as a result. Andrew has already gone after my housemate Aff, and my partner Rhys to harass for their association with me (as documented by the sticky)- thus if he had the opportunity to harm my children, he would clearly do so as past evidence proves.

There are indications from the way Andrew has spoken that he has my home address and my phone number and dispersed it – either partially or in whole – to persons unknown.  Presumably the people he would have revealed these details to might be encouraged to take action against what they think are soft, easy targets. Whether this is mere harassment, or even greater harmful intent is speculation at this point, but of one thing we can be certain: Andrew P. Marston means my family nothing but harm and there is nothing but hatred and malice in his actions.

I understand that the blogger, writer, publisher and Internet personage Vox Day is in the midst of initiating legal proceedings against Andrew. Regardless of what you may think of the man, he is quite correct that 56 months of harassment from Andrew P. Marston is quite long enough – I myself have been harassed by Andrew since late 2009. That’s going For some reason, Andrew thinks I am the instigator of this process, or at the very least is desperate to paint me as the person responsible for what he demonstrably is falsely claiming is harassment and stalking. Prior to very recent events, while I did refer to Vox’s blog for additional evidence of Andrew’s harassment and stalking, I had not participated nor commented on that blog. The only reason I did so recently was because Andrew was exploiting a flaw in Blogger/Blogspot’s comment permissions and attempting to impersonate other people in a desperate attempt to paint himself as a victim, and I headed off the possibility of him stealing my identity in such a high-traffic place. Invariably, he did attempt this, but I am fortunate enough to have a place that Andrew cannot exploit and pretend to be someone else on – namely, my website, and the associated Affsdiary Forums. It is a digital place where Andrew is unwelcome, and cannot pretend to be someone else, nor use proxies and other methods of obscurement on.

For those who are his victims, it is a simple matter to create an account and establish their own identity there, and create their own proof thread to show they are in fact the ones posting on blogger or Blogspot.

After reading through Andrew’s temper tantrum from over my shoulder, a friend of mine notes:

Have you ever had that feeling that you’re standing in a room where everyone hates you, and wishes you would move along like a bad fart?

I bet Yama gets that every day.

There’s surgery for disfigurements, and medications for certain mental conditions. There isn’t any help for stupid, and Andrew here has a terminal case of it.