I like short stories, since I can read one story right before going to sleep. So I was looking forward to seeing the next Book Bomb at Monster Hunter Nation. Book Bombs are basically Larry saying “I read this author’s book, think it’s totally awesome, it hasn’t got enough attention and I think you, my readers, would enjoy it.” Since the books usually recommended by Larry are highly entertaining reads, his readers buy copies, which boost the book up the Amazon rankings in the hopes that people not participating in the Book Bomb see it and give the book / author a chance. Talk about giving talented new authors a boost!

Anyway, the previous Book Bomb and this current one are different, since they involve shorter works – novella, novellette and short stories – of authors they think are worthy of being nominated for a Hugo. The latter two types are especially problematic to get a hold of because they tend to be published in anthologies or magazines, so Larry and Brad Torgersen contacted the authors for something that could be plugged in lieu of the stories in question. In this case though, one of the authors responded that the story that was nominated is up for free online.

Tuesdays with Molakesh the Destroyer is a well written short by Megan Grey, which is one of the stories on the Sad Puppies slate. (EDITED TO ADD: Turns out it’s not eligible, I think, until next year. I hope it gets nominated then!) I actually think it could be made into a movie. It manages to have the reader relate easily to the narrating character, establishes right off the bat that this is urban fantasy, and had me wondering ‘why is Molakesh there?’ I giggled reading about the homeowners’ association; I hear such horror stories about them so I kinda get the reference; our own experiences of such are different (at least, back in my parents’ house in the Philippines in the place where we lived. There’s no way that area would get the uniform neat appearance of mowed lawns and limitations on what you could plant and such. Ahem. Digressed.) The characters are people one can easily relate with, especially if one is one of those social outcasts during high school for whatever reason, and was bullied during that time. The main character is clearly a teen; and I liked how she is handled. Sarah Jean’s responses and her interaction with her mother is one I’m fairly sure most of us can relate to: “But Mom~!” … then having to grumblingly do as told. I do wish the concept of ‘service’ as is used in the story were a bit more elaborated on; but perhaps if it were made into a movie it could be better shown. (I can dream right?)

Molakesh, despite being a demon, is also a character that is familiar to us – the crochety, lonely old man in the neighborhood, and yet the story makes no bones about him being a demon. Yet in that description is the key to the rest of the story, which I won’t spoil. Go read it, it’s one that I found easy to immerse myself in.

The portrayal of Molakesh had me remembering the episodic Game-of-Thrones-esque epic saga my youngest brother was writing around the age of 6-10. It involved demons, detailed power struggles, complete with multipage, extremely detailed character profiles and demon type profiles. (Why demons? My brother said ‘because angels would be boring to write about.’ He was a six year old in a family of Odds.) I wonder what happened to the story – he spent hours illustrating it (with very childish drawings in pencil and crayon and colored pencils. C’mon. Six years old.)

This story sent me back to those days, where he’d tell us the story’s latest installments as we sat around the dinner table.

He’s an auditor now, and he still has that exacting attention to detail.

I think I’ll email him about it before I sleep. And email him the link to the story. I think he’d enjoy it too. He would have done, at six.

edited to add: I’ve bought Totaled by Kary English, and A Time Foreclosed by Edward M. Lerner. The anthologies are added to my wishlist for now, because that was all my digital loose change. ;_;

A few weeks ago, on a whim, I looked up Luis Royo on Book Depository again, and discovered not just that the site had restocked several of the artbooks, but also listed The Ice Dragon, written by George RR Martin… and illustrated by Luis Royo. Billed as a children’s book, both Rhys and I were quite intrigued by the idea of Royo-sensei doing art for a children’s book – we’re more familiar with Royo’s sensual, beautiful art as applied to fantasy, sci-fi and erotic works. Nevertheless, as we are both fans of Royo’s work and Martin is a good writer, we ordered the book.

Even better, when I looked inside, it was quite clear that 1) this IS a children’s book, but as it was written back in the 1980s, it does not give the feel of talking down to the reader the way I sometimes feel these days reading some of the books assigned to my son’s reading in school. and 2) most of the book is graced by beautiful illustrations by Luis Royo.

A quick skim of the book tells me that, provided your children are the old-fashioned sort, this is a book that you and your children will enjoy, especially if it is read out loud – but I’ll leave that up to the parents’ judgement. Martin weaves a beautiful, but bittersweet tale.

I’ve found out since this is actually a new edition and the older version had a different illustrator. I’m very surprised at how well the artwork fits the story. The print version (I can’t speak for the Kindle version, I’m afraid since I don’t have that) has both text and illustrations tinted blue, with illustrations on the inside of the cover and the back, at the end of the book in yellow tints. 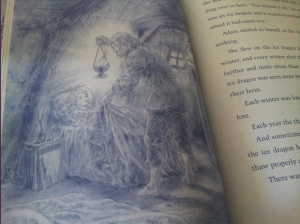 A surprise awaits with this edition of the hardcover, as the dust jacket hides a larger, extended version of the cover.

All in all I’d consider this a fantastic buy, both for the appreciation of the wordsmith’s craft, as well as the artist’s. It is, in my opinion, a perfect meeting of the skills of two masters in their art.