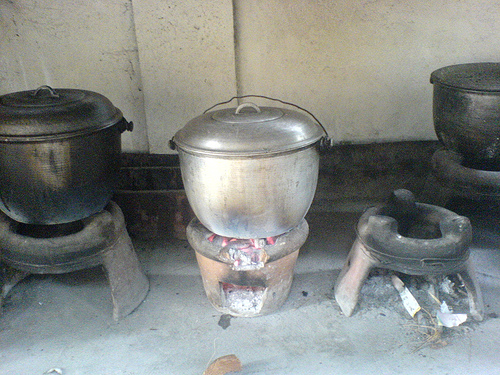 (Yes I know, not quite the same thing, it’s a pun, for the humor impaired.)

See that pot above? I have a smaller version. You can boil water in it, cook rice with it, or soups or stews. I didn’t feel right about migrating to Australia without one (or without a tabo. I use it to rinse out the tub or when cleaning the shower, it’s really good for pouring water where the spigot doesn’t reach.) You can buy them from any market in the Philippines, and even some department store groceries.

This are originally my comments from Larry Correia’s post fisking the flaming idiot who said it was too much for us to expect poor people to cook. If the fool’s hypothetical poor people throw out their whole damn kitchen and all their eating utensils every. single. time. they cook, they are not poor, by any stretch of imagination. Seriously, give the whole fisk a read. It’s totally worth it.

But let’s say you had to get things new. Besides the dollar store…

This idiot’s also never gone into Kmart or other places where it’s cheap – a full 54 piece starter set – bowls, plates, mugs, cutlery, enough for 4 people – is 39 AUD – probably about 25 USD, and that’s brand new. A full 80 piece kitchen set of cookware costs about 69 AUD – oh hey they even come with dining cutlery!

We still have the cheap small pot that my husband used during his bachelor pad days. It’s great for cooking instant noodles, and it came from Kmart. It’s 11 years old.

There are entire markets that deal in cheap but oddly durable goods; Daiso, for example, Kmart, Walmart, the wide range of dollar stores and the Asian run farmers’ markets sell veg, spices and dry goods for cheap.

This blithering moron doesn’t know what it’s like to be poor. He’s never had to eat rice where you had to wash bugs and pick out small stones out of the rice. He’s never had to haul water into the house from outside for bathing and boil it for drink, and skim away the white chalky stuff that floats on top before it’s okay to drink or use for cooking.

ANYTHING that is a bulb or a corm or root is ‘sustainable.’ Garlic, onions, ginger- Large pots will find themselves overcrowded in relatively short order. Potatoes are grown in sacks fairly easily (Or those neat large pots with the hatch on one side) and carrots are pottable. I find myself also very jealous of the people who are able to grow lush blueberry bushes in a pot; my in laws grew some in a plot and the birds got most of them. Dad to grow Filipino bird chillies (siling labuyo*) in pots, but my chickens loved them – chickens would eat them as treatment for chicken colds. Since we kept the birds as pets/egg providers, we never found out if the resulting flesh from those chooks were pre-spiced. Dad? He’d sigh in amused resignation.

Trees are also pottable; there are ‘fruit salad’ tree grafts where you can get different citruses, or apples, etc, on a single tree, and they make them in pot size varieties. I know Costco sold young fruit trees like limes and lemons and such. The calamodin lime (Kalamansi to us Filipinos) is also a common pot citrus plant and it’s growing habit more greatly resembles a bush than a tree. I’ve seen them in California, and here in Australia (to my delight, in Victoria as well!). They’re found in Asian groceries too.

My father told me of a Swedish or Norwegian (?) fellow who so fell in love with the things that he very very carefully squeezed out a bottle of juice and put intact seeds in it, and smuggled it back home. He later wrote to my father, telling him with delight that his bush was flourishing in a pot, which he would train a sun lamp on, and it was providing him with delicious little kalamansi limes.

Honestly, this intellectual cripple would have difficulty surviving in any Philippine farm; and a number of those still cook on metal and clay pots on clay stoves or open cookfires that use wood, charcoal or corncobs. An easy google search shows a variety of these, and I bet the guy from Primitive Technology could make these.

Disclaimer: The following images as well as the one at the top of the post are found via Google Image search, and do not belong to me, and belong to their respective owners. Used only for illustrative purposes.

*As noted in the Wikipedia article, Siling labuyo isn’t commonly found outside of the Philippines (sadly!) – it’s spicy without being burningly hot and has a rather distinct flavour different from Thai bird chillies. You can get the authentic taste with Mama Sita’s Siling Labuyo Sauce. I’m not often a fan of spicy food, but I like this, especially a couple of drops on a well seasoned steak.