Back when I was in college/early days of working, there was a little game called Pandemic. It had a quirky premise: you are a disease, and your goal was to kill everyone on the planet, before they shut down flights and ships, and before someone created a vaccine and started inoculating people against you. It was a fun little game that you could do while doing homework especially if you were doing several typos and needed a short break. Surprisingly, it was actually conducive to productivity since you had to wait a while before your mutations and evolutions took effect and while you were waiting, you could keep working. I introduced this game to several of my online friends, and since we’re of the geeky and usually rather busy sort, this was a game with plenty of appeal. We could let it run in the background while we were typing up homework or researching, and then take little breathers. If I had to come up with an equivalent, it’s like running for 15 minutes then jogging for 5. 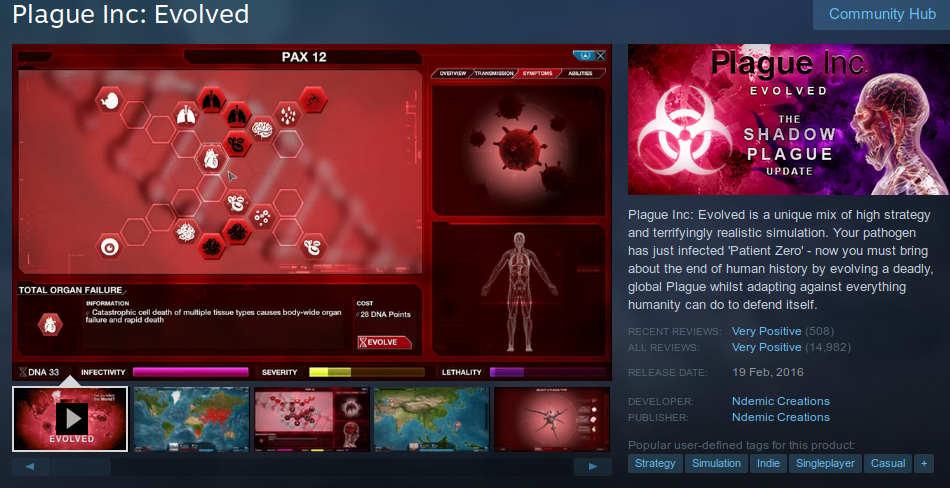 Screenshot from Steam; this is the current version of the game.

Now, if you were playing on Normal and up, you would get a random country to start in. Pretty quickly we found out that if you started ANYWHERE but Madagascar, you couldn’t win the game, because Madagascar would shut down its ports and airport at the slightest hint of epidemics. My AIM messages over a while were variations on “Dammnit, Shadow, I hate you for introducing me into this game, it’s awesome, but FUCKING MADAGASCAR.” Yeah, it was that fun, and I laughed a lot, because I knew the other person was also getting work done.

Then one day, I got Madagascar as my starting point. HOLEEEE- here we goooo~ I mutated my strain slowly and managed to spread to the other continents before growing worse. This was probably the only time that I paid less attention to my work and more on the game. Long story short, I eventually killed everyone on the planet and won.

So yeah, there was no way to win unless you started in Madagascar or somehow infected it before you were noticed.

Then, recently, news of the black plague resurfacing in Madagascar turned up. Contrary to common belief, bubonic plague actually still exists, but it’s now controllable, and, more importantly, something that antibiotics work on. Except, unlike the previous Black Plague, it’s now airborne.

I have to admit, I only heard about the airborne mutation before where it started came up. Needless to say, when I saw it was starting in Madagascar, I first laughed myself hysterical, then had to explain to a very confused Housemate why I was cracking up.

Add to the fact that the game (the original board game, at least) has been used by the scientific community for educational scenarios, and that the game’s realism is pretty good, I made it a point though, to keep an eye on the news about it. (Because, goddamnit, it started in Madagascar. The world is <i>fscked.</i> Actually, not really.)  Nevertheless, I don’t think that the game devs would have anticipated that the disease could be spread by cultural practices.

Speaking of AIM, I’m rather sad to hear that the service is being shut down. Geez. 20 years. I kept in touch with a lot of friends through the service, and spent many a night chatting with Rhys through the program. AIM was one of the reasons why our relationship came to be, and why we’re together today.

At any rate, I thought I would share the interesting links that I saw recently. Perhaps someone will be be able to draw some inspiration from them!

Genes altered inside a person for the first time ever I can’t help but think of Umbrella Corporation when reading that. Interestingly enough, this paragraph reminded me of how I described potential gene splicing back in my high school report on genetics.

“We cut your DNA, open it up, insert a gene, stitch it back up. Invisible mending,” said Dr. Sandy Macrae, president of Sangamo Therapeutics, the California company testing this for two metabolic diseases and haemophilia. “It becomes part of your DNA and is there for the rest of your life.”

I drew little cartoon DNA, and scissors, to illustrate the report. I’ve read briefly about CRISPR before, but haven’t seen much info about its’ progress since. I guess I’ve been too busy.