I’m in Australia. So really, the elections in the US, and the circus that’s been going around it, have been an occasional source of entertainment for me. I’ve really been too busy to keep track. But as I said over in Monster Hunter Nation: I’m ecstatic that Trump won because that means Hillary lost. And I was someone who was reading Clinton and the media’s behavior as “They’ve rigged the election, they know something’s been done.” Nobody’s happier than I am to be wrong on that score.

At any rate, I had delicious popcorn, and one of the local news channels was doing a ‘live, as it happens’ show of the elections called America Decides. As far as commentators go, it was actually fairly even-handed, which surprised me, so I stuck with that show. Rhys came home, and laughed when he saw me watching the elections with popcorn. 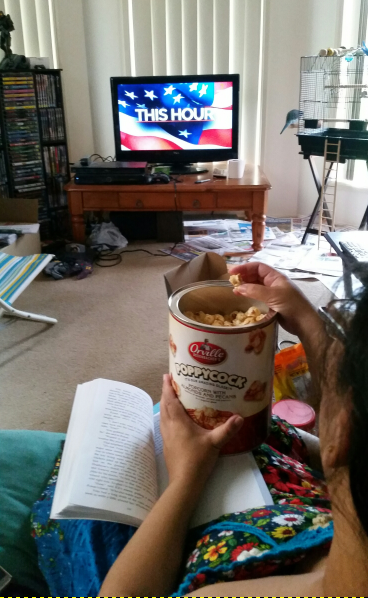 The moment that he decides to get serious about running:

It’s surreal to watch this 2011 video of Obama and Seth Meyers taunting Trump about a presidential run pic.twitter.com/XkZNGmzcUx

Because, really, that’s just asking for it.

Before I get the usual screaming, I didn’t like Hillary because Benghazi and all the other shit she’s recently done, and all her history from before, and her aiding and abetting her husband in escaping rape accusations. Frankly, I think we escaped getting into a World War for certain with her losing the Presidency. Trump? We have a maybe on that score now.

Why did Trump win?

And the above, because woah.

Also, y’know, rioting because Trump won, plus shit like this:

…kinda just reinforces the reasons why people voted for Trump.

Also, proves Vox Day right with his “SJWs will always double down.”

I honestly expected some of the regressive left to ask “Where did we go wrong?

In fairness, SOME people are actually realizing they done messed up.

Though, with this magnitude, is it really just ‘double’ and not orders of magnitude double-down?

Anyway, this isn’t the focus of my post. I’m mostly entertained right now. Been laughing at the antics of the losing side (the cry-ins, the needing psychological support, the riots, the calls for assassination. the fake hate crimes…) and the sheer insanity that has been exploding all over the Internet.

They don’t handle reality or real life very well, it looks like.

Apparently 8 is the age when children reach their peak wokeness. pic.twitter.com/uiPZmEuYQg

Then there are those that you really should just report to the police because of a high risk of suicide there.

There’s been some funny things linked from the pro-Trump side too.

I can’t stop giggling at the pure crazy in it. I had to share and it’s been shared.

Better get that phaser burn looked at.

You poor precious snowflake; you didn't get your way so everyone needs to run around like chicken little? ???? https://t.co/Bk32yyteGm

That's never good. Hey @AdamBaldwin did I unseat you? ?? https://t.co/iwZDeryO2X

By the way, Le Monde blaming Gamergate for Trump winning is surreal, but unsurprising. Gamergate seems to be the boogeyman for the crybullies so it’s ‘everywhere’.

Do these people think that just because Trump won, overnight the United States of America instantly became a Middle Eastern Islamic hellhole, or some benighted section of Africa where the belief that raping virgins will cure them of AIDs?

Apparently, in the imaginary world they live in, YES.

On a more serious note, I really hope that the TPP dies too – and I mean REALLY dead, for certain, because I’m not sold on this – Obama is still in power. I’m just wondering how much damage a vindictive Obama could still do.

Hell, I hope Trump survives to become President. These flaming retards are even more loose cannon than they claim he is.

Edited to add these:

Oh my Gods. I hope that little boy will be okay.

Child abuse in the name of politics seem to be a norm for Shitlery supporters. If people are wondering why the Podesta emails are gaining so much traction in plausibility, you only need to look at the supporters to understand.

Proof that the protests are faked and not ‘grassroots’ at all.

The advert is here.

Silencing people doesn’t work; but the people doing it don’t want to listen. Keep proving Vox Day right and they’ll get their own plattforms and you can NEVER silence them again!