One of the lovely, lovely folks who frequently visits Larry Correia’s site, Julaire, surprised me with a gift of a full set of the last batch of Challenge Coins. They arrived yesterday. I persuaded myself to wait until Rhys got home to open it, since it was only a half hour to wait.

My Minionhood is now official! And with the provisional PUFF exemption, I won’t need to worry about how much a role-playing dark elf’s PUFF bounty is.

Wendell looks so cuddly! Hooooooon! I don’t suppose there’ll be a Wendell plush in the swag-shop at some point, but if there is the next baby’s getting one.

My hubby especially liked the Milo coin. I’ll have to try get him one if they reissue those. The Grimm Berlin one made me rather nostalgic.

“Is that bulletproof? Let’s find out” made Rhys laugh.

The center challenge coin looks like I could have it put on a chain; but I’d have to find a strong one because the coins were surprisingly very heavy.

One thing we were really surprised about was how finely detailed the coins were. The pictures really don’t do them justice.

The enamel layers for the coins here were really nicely done, and I didn’t notice the pattern in the blue at first. The Grimnoir coin really looks like something you’d have to prove you’re a member of a secret society.

The Grimm Berlin coin made me remember these coins I have, which are souvenirs of the time we lived in East Berlin. The little Berlin bears and the 750 Jahre coin were from the 750th Anniversary celebration of Berlin’s founding; souvenirs thrown from the floats on parade, which we were fortunate enough to get at the risk of trampled fingers. The coin with the eagle is a West German coin, and the rest are from East Germany. 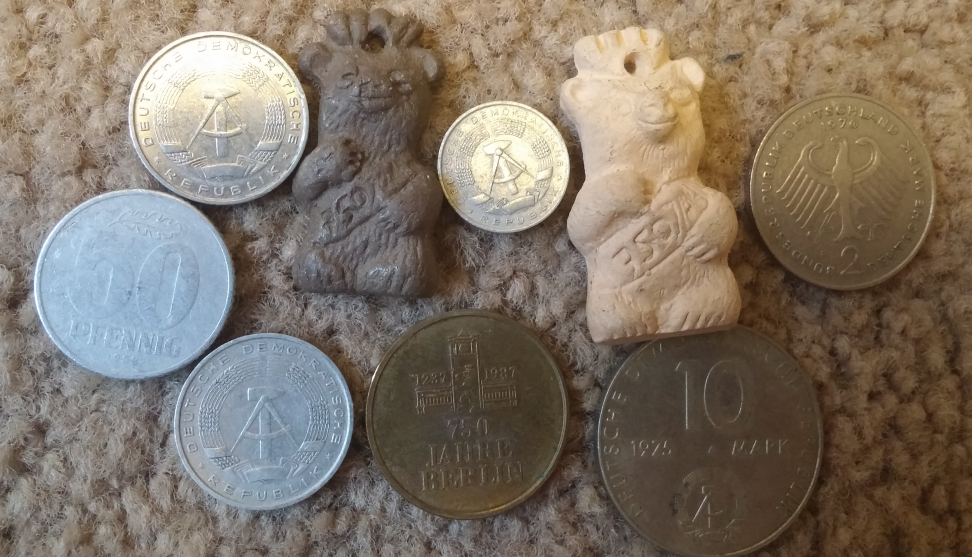 The coins below are much older, obviously, since they’re coins issued during the Nazi regine; 1 pfennig coins. There’s a bit of a story behind these; but summary of that is, we got them in trade for a bag of Milky Way and Mars  chocolates (and a few other things I’m sure,but the chocolates are what I remember the most) from a family very eager to get rid of them. 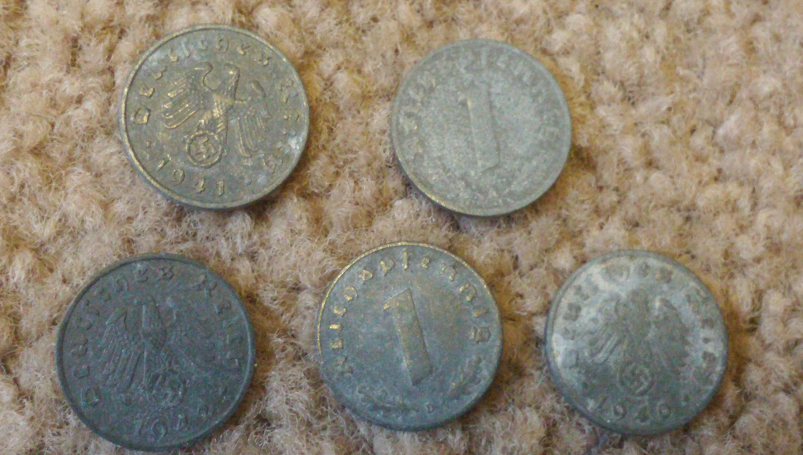 I’ll have to see about making a display case for the coins; at the moment they’re in a little box that’s shaped like a book and stashed safely by.

I’m very happy by the gift of challenge coins, and I’m even happier by the fact that I’ve made a good friend over the last few months. Thank you, Juliaire! big, big hugs!