For a certain ridiculously persistent stalker and social plague, that is. 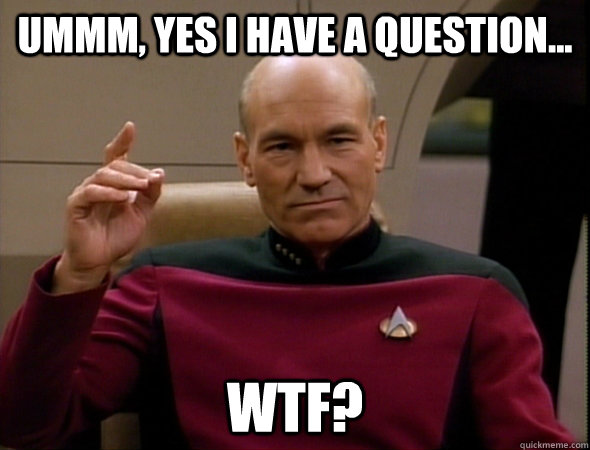 I mean, there’s gotta be a reason why I’m constantly being dragged up in conversations which have nothing to do with me, especially over the past few days where I’ve been too busy and physically fried to actually keep up with things online.

Coz, you know, Christmas preparations and all that, in real life, mean that I’m kinda swamped and busy. Especially with baking things (there may be actual posts about that, we’ll see) and other things.

At any rate, have yet another update of the Stalker Sticky as well as the Spewdonym List.

Woah. /keanureeves The stuff I discover when I resurface from being AFK RL BUSY MODE.

eta: Okay having read through a chunk of that, I think it’s a good idea to put this out there once more. This was a facepalming flame directed at Yama on Jordan’s blog yeaaaaaaaaaars ago. It bears repeating now.

But holy shit, in what UNIVERSE DID YOU FUCKING THINK THAT WOULD WORK?!

Seriously, where were you when God was handing out brains? And why, why, why is it starting to look like that your ancestors went out for tacos instead of waiting for their Apple from the Tree of Knowledge? It’s gotta be like that because there is no way this much stupid could be distilled down to three successive generations, which makes me boggle. How in the name of Darwin did natural selection not get you?

I mean it. Anyone with two neurons floating in the center of a sac of saline would have cottoned on at light speed how that ‘plan’ was going to go very, very, very, epically fail. And mutate into so much wrongness, I’m surprised that the Gods haven’t struck it down as an abomination of reality.

A friend of mine also linked these to me.

Dropping them here for later reading.

Yama is getting very, very desperate to try squirt ink and muddy the waters by spoofing somehow Jordan179’s blogspot account.

Here’s the associated screenshots highlighting the vast difference of commentary (link, because the image causes quite a bit of side scroll). Note that Count Bullets-ula is Yama in the last screenshot, where he starts trying to make the spurious claim that I had Vox stalk this Emma person, who I don’t know and have never heard of before. If she’s the girl in the video Vox links on his blog, I did not watch, as I’m not really into hipster stuff and since the close up image is of her nostril, I’m not likely to click. The fake Jordan179 makes the same claim. This is demonstrably stupid, as I actually TALK to Jordan179, and stupider still, since I have Jordan’s RL address because I have plans to send him a present. So I KNOW where Jordan lives.

Note the posting of Yama as an anonymous in thethread that the real Jordan links. Again, Yama makes the comment of ‘filing spurious reports’, desperate to make it sound like Jordan has done so, when Jordan has actually said outright that he hasn’t filed any police reports.

Yama’s visted my LJ no less than three times from the times I’ve checked. Yeesh.

Speaking of LJ, Yama is currently harassing someone I look up to as an artist and writer, MCA Hogarth. Over Cuba. Where Micah is FROM. Pay attention to how he pooh-poohs the suffering of her family, by trying to draw the false equivalence that ‘people have it worse.’

Clearly Yama’s not happy that I’m able to show he’s pretending to be Jordan.

I like how he’s tacitly admitting to be Jordan in his reply. 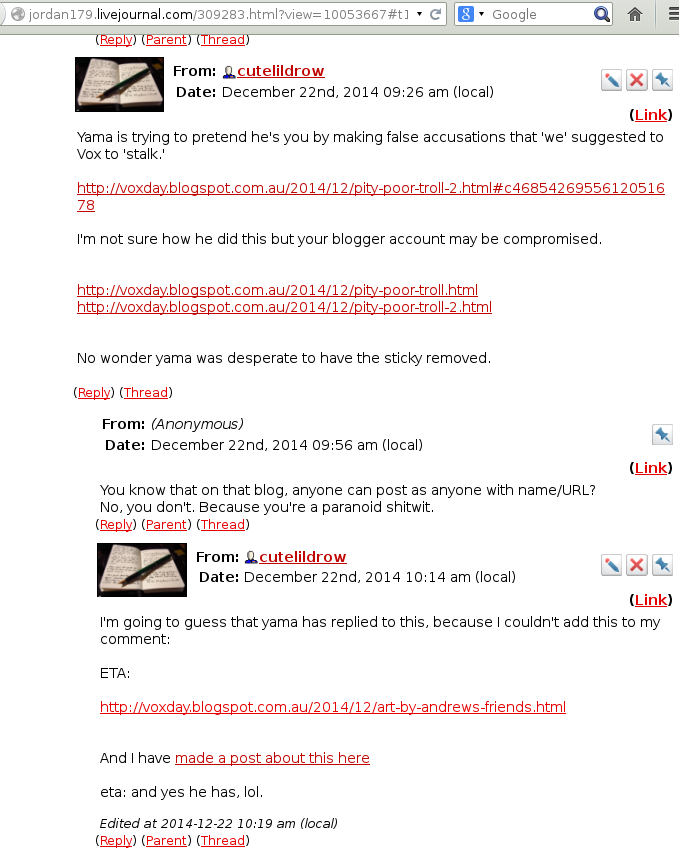 Yep I hit a nerve.

I have decided to comment over on Vox Populi for the first time.

First, this is to establish my identity so that Yama cannot try to pretend to be me, as he is currently doing with Jordan179, and apparently, Markku in the Vox Populi blog.

Second, as proof that this was me commenting, I have taken a screenshot of my post, and posted it here and in the Stalker Sticky thread. 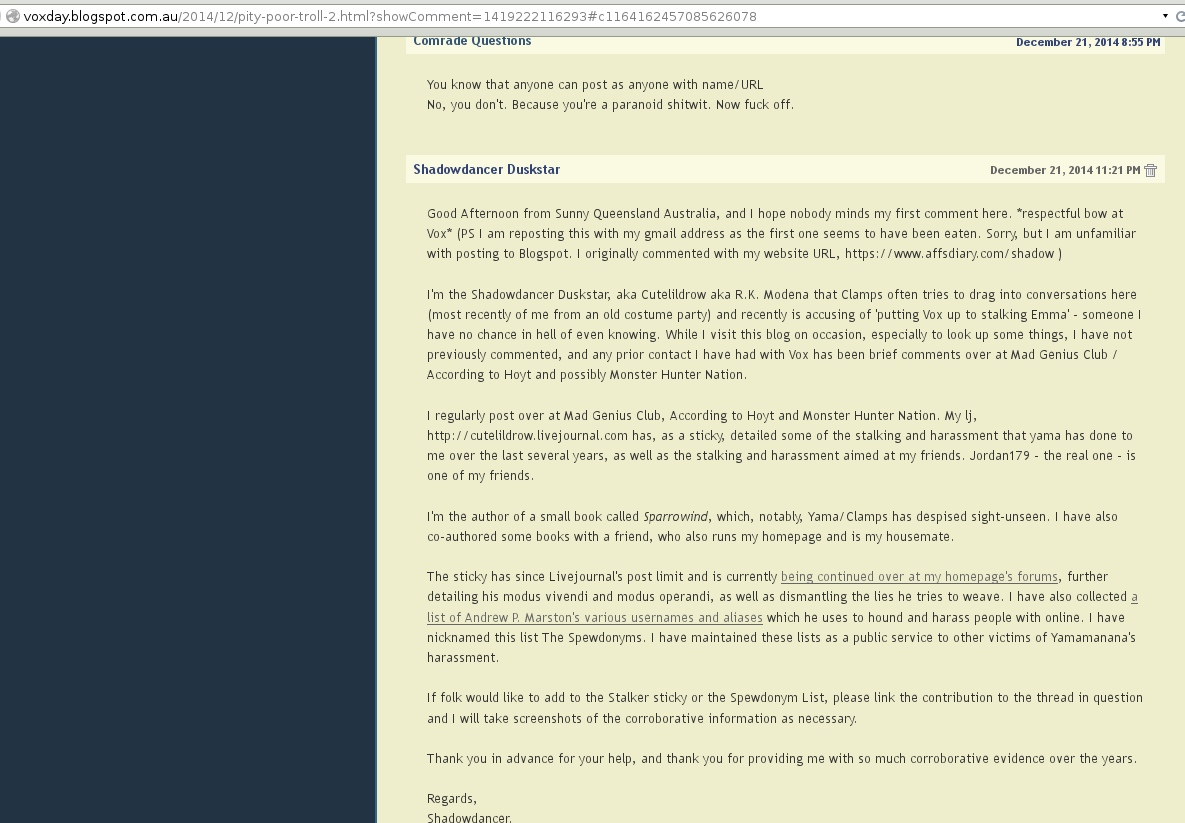 I will ALSO make the point of posting screenshots of my own comments to prove that I am the one posting in the Forums as that is someplace where Yama has been banned from and is unable to post to.